“There were some confusion but that’s now been sorted out,” Dasot added.

Scores more were injured in the disaster, which came at the start of Navaratri, a nine-day Hindu festival which is one of the most important in the Hindu calendar and when crowds are particularly large.

The temple reopened to devotees on Wednesday but not more than 200 Hindus were seen at the complex. 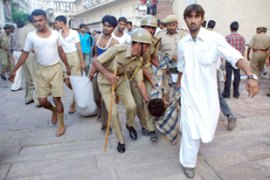 At least 147 people die as thousands gather for Hindu festival in Rajasthan temple.