“Suharto’s condition deteriorated this morning,” the head of the medical team treating the former five-star general said on Tuesday.
Doctors had earlier said that Suharto would require a second pacemaker but his condition was not stable enough to perform the procedure.
Suharto led Indonesia for more than three decades, heading a government that has been blamed for the deaths of hundreds of thousands of people.
He was forced to resign in 1998 after the Asian financial crisis sent Indonesia’s economy into freefall and triggered violent street protests.
Critics accuse Suharto, his family and close associates of widespread corruption, syphoning off billions of dollars in state funds during his time in power.
But despite several legal attempts since his downfall, poor health has enabled Suharto to avoid prosecution.
Source : News Agencies 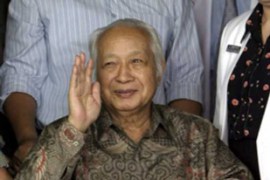 The former Indonesian leader ‘deteriorating’ after being admitted to hospital.