Jendayi Frazer, the visiting US diplomat in charge of African affairs who is mediating in the crisis, told reporters in Nairobi that while Kenyans had been cheated by their leadership, the US still had confidence in the country.

Odinga, who heads the Orange Democratic Movement (ODM), decided to postpone the protest till further notice after meeting Frazer for a second time in Nairobi.

The first signs of compromise became evident when Odinga said he had been assured the “mediation process is about to start” and urged his supporters to reject violence.

Speaking to Al Jazeera’s Africa bureau chief Andrew Simmons after his meeting with Frazer, Odinga said: “There has been a major breakthrough… I have talked to [African Union chairman and Ghana] President [John] Kufour, who has confirmed to me that he is on his way and that he will arrive [in Nairobi] tomorrow evening.

“We will start the negotiations on Wednesday morning. He said that he wants to meet both of us together. That is my side and President Kibaki’s side. It is going to be a dialogue.”

Kibaki has said he is ready to form “a government of national unity”.

After her meeting with Odinga, Frazer said: “It’s up to President Kufour and the parties themselves to decide how they want to proceed.

“The United States has not come up with any prescription for how that dialogue should be structured or what should come out of that dialogue.”
Asked whether he will be speaking to Kibaki since they will be at the same table, Odinga told Al Jazeera: “That is what President Kufour said. Because they have to be direct talks so that we can negotiate out of this crisis.”

On the question of sharing power with Kibaki, Odinga said: “I have worked with Mr Kibaki before. I have no problem working with him. It depends which role each of us is going to play. That is what we must negotiate.

“If it is in the interests of Kenya I say that we are prepared to walk the extra mile to bring about peace in our country and a durable solution to the problem that we have right now.”

Speaking for the government, Raphael Tuju, Kenya’s foreign minister, told Al Jazeera: “[President Kibaki] has reached out to members of the opposition and said he is ready to work with them.

“The only thing that was stopping it was the call by the ODM to go to the streets. Now they have called off the street protests, there is a platform for negotiation, discussion and reconciliation.

“What is important is that we are all Kenyans, and we must shun the rhetoric and the ideology of hate. The parties are constructs that come and go and we have to unite as Kenyans.”

Amid the nascent signs of political reconciliation, Kenya’s government said that more than 480 people have been killed and 255,000 displaced by the post-election violence.

But the opposition about 1,000 have been killed and aid workers say the toll could go much higher than the official figure.

Eleven UN trucks were heading to western Kenya, the heart of the refugee crisis, under police escort on Monday, with enough food to feed 38,000 people for two weeks.

While much of the country returned to calm, there was an unconfirmed report from Uganda that 30 Kenyans might have drowned after being pursued by attackers into a river on the border.

Odinga had looked on course to win the December 27 election until Kibaki, 76, was handed a narrow victory.

Fanning the controversy, the Law Society of Kenya accused electoral officials of “dishonesty and ineptitude”, called Kibaki’s swearing-in “null and void”, and urged a fresh vote.

Much of the trouble has pitched opposition supporters against members of Kibaki’s Kikuyu tribe, including the massacre of about 30 people sheltering in a church near Eldoret, a western town with decades-old land tensions. 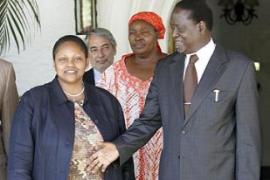 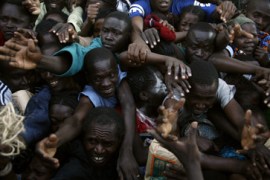 How easily the social fabric unravelled and the country plunged into war troubles many. 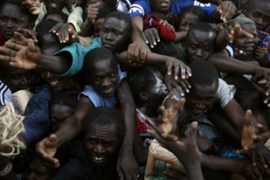 Raila Odinga rejects unity government but wants power sharing on his own terms. 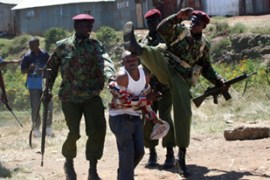