Separately around 3,000 lawyers, joined by members of former cricketer Imran Khan’s opposition political party, also burned a dummy of the president in the eastern city of Lahore.

At least 4,000 protesters shouted “Go Musharraf, go” in the southern city of Karachi and there were protests in the central Pakistani city of Multan and the northwestern city of Peshawar.

Meanwhile, a group of retired Pakistani military officers meanwhile urged Musharraf to step down and hand over power to Chaudhry, who has been under house arrest since he was sacked on November 3.

Pakistan‘s legal community has held weekly protests to call for the release of Chaudhry and several top lawyers who have been detained since November, despite the lifting of emergency rule on December 15.

With Musharraf facing growing dissent ahead of elections next month, a group of 200 retired generals, air marshals and other officers from the Pakistan Ex-Servicemen Society made fresh calls for him to step down.

“Musharraf should step down and hand over power to Justice Chaudhry, who is still constitutional chief justice,” former Pakistan Air Force chief Asghar Khan told reporters after a meeting of the group.

He said Chaudhry should form a neutral caretaker government to supervise free and fair elections next month.

Bhagwandas, who was also sacked for refusing to endorse emergency rule, said police had stopped him from leaving Karachi on Thursday when he tried to catch a plane to Islamabad.

“These officials misbehaved with me when I said I am going to Islamabad to meet Chief Justice Chaudhry,” Bhagwandas told AFP.

“I was about to leave my house for the airport when some police officials came and told me, ‘You cannot leave Karachi‘. This shows the weakness of the government,” he added.

Officials were not immediately available to comment on his claims.

Former army chief General Mirza Aslam Beg, who headed the military from 1988 to 1991, said Musharraf had tarnished the image of the armed forces and called on all ex-servicemen to help restore it.

“We should also work together to strengthen democracy by removing the only impediment in its way, Pervez Musharraf,” he told reporters on Thursday.

Chaudhry called on Western leaders in an open letter Wednesday to stop backing Musharraf, branding him an “extremist general” and saying he, his family and some other judges were being held in “medieval” conditions.

Opponents accuse Musharraf of sacking Chaudhry to head off a Supreme Court ruling that could have overturned his re-election as president.

A bomb exploded outside an anti-terrorism court in the south-western city of Quetta earlier on Thursday, wounding three people.  It was not immediately clear if it was linked to the lawyers’ protests. 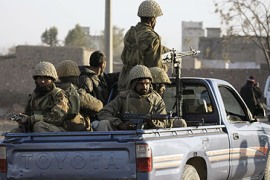 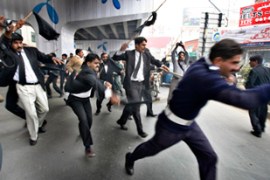 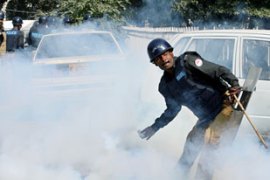 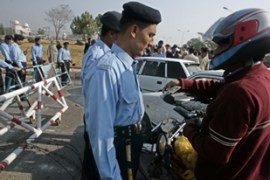 Day of protest against emergency rule marked by assaults and arrests in main cities.