An agency official said some of the inquiries overlapped with the Securities and Exchange Commission (SEC) which has opened three dozen civil investigations into the sub-prime market collapse.

Goldman Sachs, Morgan Stanley and Bear Stearns – among Wall Street’s largest banks – each said on Tuesday that government investigators were seeking information from them about their sub-prime activities.

Morgan Stanley said on Tuesday it is a defendant in lawsuits related to its links with mortgage lenders Countrywide Financial and New Century Financial.

At the same time, Countrywide posted a larger-than-expected quarterly loss on Tuesday as homeowners fell behind on payments. The largest US mortgage lender is being acquired by Bank of America.

Years in the making, the sub-prime crisis is playing a major role in shifting the US presidential campaign debate toward the economy, while Congress is seeking an urgent policy response.

The House of Representatives overwhelmingly passed a $146 billion economic stimulus package on Tuesday.

Parts of the package would allow the Federal Housing Administration and housing finance giants Fannie Mae and Freddie Mac to help prop up the mortgage market. 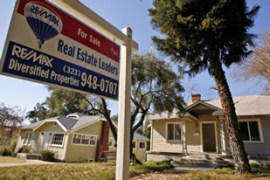