Under a six-party deal agreed last year with South Korea, Japan, China, Russia and the US, North Korea promised to disclose its entire nuclear programme and eventually dismantle it in return for fuel aid and political concessions.

Pyongyang has said it gave the US a complete list of its nuclear programme in November but Washington says it was not “complete and correct”.

North Korea has accused the US of failing to meet its commitments and blames Washington for the slow progress in implementing the deal struck in February.

Commening on the delays on Monday, Condoleezza Rice, the US secretary of state, said North Korea’s disablement of its nuclear facilities “needs to continue and, in fact, has gone relatively well”.

“But there is the matter of the accurate and complete declaration that North Korea needs to file so that there is confidence going forward into the next phase” involving the dismantling of its nuclear facilities, she added.
“I am hopeful that the North is now ready to have serious discussions about that, and we will see.”
Rice is expected to visit South Korea on February 25 for the inauguration of Lee Myung-bak as the country’s new president.
Frustration
The delays in dismantling the North’s nuclear programme has led several conservatives in the US government to express frustration at the process and question whether the North has any intention of living up to its part of the bargain.

Earlier this month Jay Lefkowitz, the US president’s special envoy on North Korea human rights, said that Pyongyang’s failure to meet the declaration deadline “signals that North Korea is not serious about disarming in a timely manner”.

He added that it was “increasingly clear that North Korea will remain in its present nuclear status when the administration leaves office in one year”, but his comments were quickly disavowed by the state department.
A senior US official denied the six-party process had failed and rejected the possibility that the US might take a more coercive stance toward North Korea by hinting at punitive actions if it fails to produce the declaration.
“That just takes you down a different road and I don’t think anyone is ready to take that road,” the unnamed official told Rreuters.
“We are really trying to make this work. We feel … we’ve actually gotten some success from this process and we don’t want to give up just because we are a couple of weeks off schedule,” he added.

The official’s comments echoed the line taken by Christopher Hill, the top US envoy on nuclear negotiations with the North, who said this month that he was “not too concerned about them being a little late”. 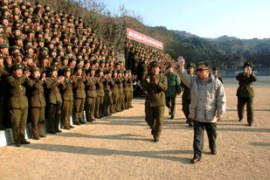 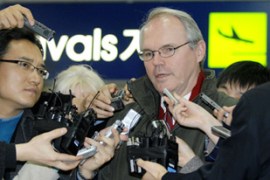 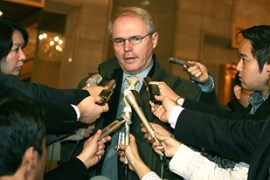