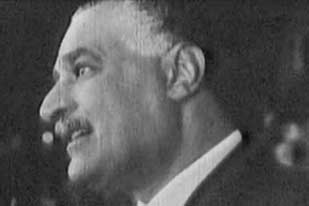 When it comes to the Arab world, the start of the 20th century was nothing less than stormy. Political unrest and a clash of interests between Britain and France, then the world’s most dominant colonial powers, and the Arabs prevailed.

Arab opposition to Ottoman rule started in the 19th century in response to a series of Ottoman regulations which the Arabs saw as a bid to black-out the Arabic language and identity.

As Ottoman domination started to decline towards the end of the first world war, Arabs hoped that they would finally win their independence. They were shocked to see their land falling instead to the invading European armies, in particular the British and French.

As huge invading armies swept across their lands, Arabs realised that the only way to confront such overwhelming power was to unite. Unity swiftly became the dream of Arab public opinion. Catchy slogans, poetry, literature and songs hailed unity as a dream across the Arab world.

Subhi al-Asmar, 82, a Palestinian refugee in Ain al-Hilwa refugee camp in Lebanon, recalls: “We were schoolchildren in Akka. Nearly on a daily basis there were demonstrations and protests against British occupation and increasing Jewish immigration to Palestine.

“Akka’s narrow streets used to host a sea of men marching and chanting: ‘Unity, unity from Taurus to Rafah.’ They meant unity of the historical Grand Syria [currently Syria, Lebanon, Palestine and Jordan].”

During the 20th century, slogans calling for unity started to appear across the Arab world and several attempts at unity took place, particularly after Gamal Abdel Nasser, the godfather of Arab unity, became the Egyptian president in 1956.

In 1962, monarchy was abolished in North Yemen, which from 1958-1961 had been part of a confederation with Egypt and Syria called the United Arab States, and Abd Allah al-Sallal became the first Yemeni president.

Huge pro-unity demonstrations welcomed the installation of al-Sallal, who was a member of Nasser’s Egyptian pan-Arab Free Officers movement. Female demonstrators who gathered at the airport on November 3, 1962, to welcome him urged unity between Egypt and Yemen, chanting: “Unity, unity Sallal. Unity, unity Nasser.”

In 1958, the United Arab Republic (UAR), which briefly united Egypt and Syria, was created. Prior to that time and during the preparations for the UAR’s establishment, many demonstrations took place in Syria where the popular chant was: “Unity, unity with brown Abdel Nasser.”

The word “brown” had a symbolic meaning as brown skin was considered to be a distinctive Arab feature.

Although Arab unity is no longer publicly promoted by current Arab governments, it still features in spontaneous popular demonstrations. The day Baghdad fell to the invading US forces in April 2003, the streets of Cairo were packed with demonstrators chanting: “Where is the Arab army?”

In the second half of the 20th century, pro-unity leaders assumed power in several Arab countries, including Nasser in Egypt, Shukri al-Quwatli in Syria, al-Sallal in North Yemen, Ahmad ben Bella in Algeria, Muaamar Gaddafi in Libya and Abd al-Salam Aref in Iraq.

Those leaders were backed by popular support for Arab unity and many official slogans were adopted to demonstrate the governments’ pro-unity stance.

Mottos such as “Arabs’ oil for Arabs” and “the land of Arabs is for Arabs” started to be uttered by high-ranking officials and written on government buildings.

The phrase “from the roaring [Atlantic] ocean to the defiant Gulf” – indicating the stretch of the Arab world from Morocco in the west to the Gulf in the east – appeared widely in government media, and was, in turn, widely adopted by the people.

The Arab Baath Socialist party – its slogan “An eternal ideal of one Arab nation” – was established in 1947 and ruled Iraq for more than three decades, remaining in power in Syria today. The party’s stated objectives were unity, freedom and Socialism and those words were written on every Iraqi government building until the end of Baath rule in 2003.

Song lyrics designed to fuel the passion for Arab unity have been around for decades. One of the most famous across the Arab world was written by the Syrian poet Fakhri al-Baroudi:

Arabs’ homeland is my country

From al-Sham [Greater Syria] to Baghdad

From Egypt to Tetouan [a Moroccan city]

No one can separate us

Religion would not divide us

We had a civilisation and we are going to revive it

Even if the devils of man and genes stood against us

Come on my people

Climb the glory by acquiring knowledge

And sing my people “Arabs’ homeland is my country”

Arabs’ homeland is my country

From al-Sham to Baghdad”

Abd al-Halim Hafidh, an Arab idol equivalent in popularity to Elvis Presley in the US, sang My Grand Homeland in the 1960s. Songs which take Arab unity as their theme continue to appear.

In the 1990s an operatic song titled Arab Dream was performed on stage by singers from the 22 Arab countries.

While a younger generation of singers has continued the tradition of unity songs, their tone has changed. Where the songs of the second half of the 20th century reminded Arabs of their former glory and urged them to revive their golden past, recent songs blame Arabs for their state of powerlessness.

One of the best known, Wain al-Malaien? (Where are the millions?), was performed by the Lebanese singer Julia Butrus in 1997. It blamed Arabs for their weakness in aiding the Palestinians and urged them to unite against their enemies.

Sabri al-Ramahi, an Iraqi radio director, told Al Jazeera: “It was prestigious for singers to sing about unity. People used to enjoy those songs; it fuelled their passion and made them feel united, especially as they were broadcast all over the Arab world.”