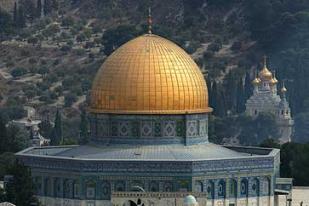 1915-1916: Hussein-McMahon correspondence. Exchange of letters between Hussein ibn Ali, sharif of Mecca, and Sir Henry McMahon, British high commissioner in Egypt, regarding the future political status of the Arab lands of the Middle East.

Britain offered Arabs across the Middle East self-rule in exchange for their aid in defeating the Ottoman empire during the first world war.

1916, May 16: Sykes-Picot Agreement. Britain and France sign a secret pact outlining their spheres of control in the Middle East after the first world war. Palestine is designated for international administration pending consultations with Russia and other powers. The agreement is seen by Arabs as a betrayal of the Hussein-McMahon correspondence.

1917, November 2: Balfour Declaration. Arthur James Balfour, Britain’s foreign secretary, sends a letter to Lord Rothschild, president of the Zionist federation, stating the government’s support for the establishment of “a national home for the Jewish people” in Palestine, the area consisting of today’s Israel, the West Bank, Gaza Strip and Jordan.

The declaration reads: “His Majesty’s Government view with favour the establishment in Palestine of a national home for the Jewish people, and will use their best endeavours to facilitate the achievement of this object, it being clearly understood that nothing shall be done which may prejudice the civil and religious rights of existing non-Jewish communities in Palestine, or the rights and political status enjoyed by Jews in any other country.”

1922, July 24: The League of Nations gives Britain a mandate to administer Palestine. Britain expresses an interest in Zionism, and describes its intention to develop a Jewish state.

–1939: In large part because of the rise of fascism in Europe, about 250,000 Jews arrive in Palestine during this period.

1929, summer: Arguments between Muslims and Jews over access to the Western Wall. More than 130 Jews are killed and 339 wounded and 116 Arabs killed and 232 wounded during clashes involving British forces.

1929, August 23: Hebron massacre: After hearing rumours of killings of Arabs in Jerusalem, rioters kill 67 Jews in Hebron. Many Jews survive by sheltering with Arab neighbours, and after the riots, the remainder of the Jewish population is evacuated by the British.

1936-39: Arab revolt to protest against Jewish immigration to Palestine led by Haj Amin al-Husseini. More than 5,000 Arabs are killed, mostly by the British. Several hundred Jews are killed by Arabs.

1946, July 22: Bombing of the King David Hotel in Jerusalem, which housed the British civil, military and police command in Palestine, by the Irgun, a Zionist organisation. A total of 91 people are killed: 28 British, 41 Arab, 17 Jewish and five from other countries.

1947, November 29: United Nations General Assembly passes a partition plan dividing the British Mandate of Palestine into two states. Accepted by the Jewish leadership but rejected by the Arab leadership.

1947-1949: The Nakba, meaning “disaster” or “cataclysm” in Arabic. Up to 900,000 Palestinians flee or are expelled from their homes in the part of the land that becomes the state of Israel.

1948, April 9, 11: Deir Yassin massacre. Between 100 and 254 Palestinian villagers, mainly women, old people and children are killed during and after an attack on the village of Deir Yassin near Jerusalem by Irgun members.

1949, April: Israel and Arab states agree an armistice. Israel takes about 50 per cent more land than was originally allotted to it by the UN partition plan.

1964, May: The Palestine Liberation Organisation (PLO) is founded in Cairo by the Arab League. The PLO states its goal as the destruction of the Israel through armed struggle, and the restoration of an “independent Palestinian state” between the Jordan river and the Mediterranean sea.

1967, November 22: UN Security Council passes resolution 242, which calls for Israel to withdraw its armed forces from all territories occupied since the 1967 Arab-Israeli war. The resolution affirms the right of all states in the region to “live in peace within secure and recognised boundaries”.

1968-1970: War of Attrition. Limited war fought between Egypt and Israel in which Egypt attempts to regain the Sinai Peninsula lost in the Six Day war. The war ended with a ceasefire in August 1970 with the same frontiers as at the start.

1969, February 2: Yasser Arafat is appointed chairman of the PLO.

1972, September 5: Eleven members of the Israeli Olympic team and one German police officer are killed by Palestinian group Black September at the Munich Olympics.

1973, October 6:  Fourth Arab-Israeli war (October war). In a surprise attack on the Jewish Day of Atonement, Egypt and Syria retake the areas in Sinai and the Golan Heights that were lost in the Six Day war. Despite initial gains they are soon forced to retreat by Israeli forces.

1973, October 22: UN Security Council passes resolution 338, which calls for a ceasefire in the on-going war between Israeli and the Arab coalition.

1978, September 17: Menachem Begin, Israel’s prime minister, and Anwar Sadat, Egypt’s president, sign the Camp David Accord, with Israel agreeing to withdraw from the Sinai Peninsula in exchange for peace and a framework for future negotiation over the West Bank and Gaza Strip.

1981, October 6: Sadat is assassinated by members of the Egyptian Islamic Jihad organisation, while reviewing a military parade, in retaliation for Sadat’s recognition of Israel.

1982, June 6: Israel invades Lebanon to remove PLO fighters who it claims are threatening its border.

1982: PLO relocates to Tunis as it is driven out of Lebanon by Israel during the six-month invasion of the country. It remains active in Lebanon but not to the same extent as before 1982.

1983, August: The Israeli army withdraws from most of Lebanon, maintaining a self-proclaimed “security zone” in the south.

1985, October 1: Israel’s Operation Wooden Leg attempts to kill Arafat with an air raid on his headquarters in Tunis. He survives, but 60 members of the PLO are killed including much of the leadership.

1990, August 2: Iraq invades Kuwait, prompting UN sanctions. An international coalition force launch and air and ground assault against Iraq in January 1991. Iraq launches missiles in Iraq and Saudi Arabia during the fighting. The war ends on February 28, 1991 with a decisive victory for the international coalition.

1993, September 13: Oslo declaration of principles. PLO and Israel agree to recognise each other.

1994, February 25: Baruch Goldstein, an American-Israeli settler, enters Al-Haram Al-Ibrahimi (The Cave of the Patriarchs), a religious site in Hebron, and kills 29 Palestinians, injuring another 125.

1995, September 28: Interim agreement on the future of Israeli-occupied Gaza and the West Bank is signed by Israel and the PLO. The agreement recognises the formation of a Palestinian Interim Self-Government Authority – an elected council.

1998, October 23: Wye River Memorandum is negotiated between Israel and the Palestinian Authority to implement the 1995 interim agreement. The memorandum examines redeployment of Israeli troops from areas occupied since 1967 and Palestinian guarantees on security.

2000, July: The Camp David summit between Ehud Barak, Israel’s prime minister, Yasser Arafat, leader of the Palestinian Authority, and President Bill Clinton. Aimed at reaching a “final status” agreement the talks break down after two weeks and the US and the Israelis blame Arafat for refusing to accept a proposal drafted by their negotiators. 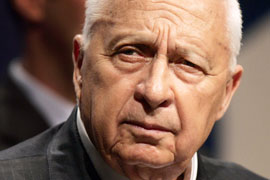 Ariel Sharon was elected leader of the Likud party on February 6, 2001

2001, February 6: Sharon is elected the leader of Likud and refuses to continue negotiations with Arafat.

2001, October 17: Rehavam Zeevi, Israel’s tourism minister, is shot dead in Jerusalem by members of the Popular Front for the Liberation of Palestine.

2002: Israel begins construction of separation barrier between the West Bank and Israel, but for some of its length it serves to annex large areas of Palestinian land.

2002, March 27, 28: Beirut summit between heads of Arab nations to discuss plans to resolve the Palestinian-Israeli conflict. Arafat is unable to attend as Israel will not guarantee he will be able to return. Arab leaders collectively offer Israel peace, recognition and normal relations in return for Israel’s withdrawal from Arab lands captured since 1967, the restoration of a Palestinian state with east Jerusalem as its capital and a “fair solution” for the 3.8 million Palestinian refugees.

2002, June 24: President George W Bush, outlines his ‘road map’ to peace between Israel and the Palestinians. The plan, proposed by the ‘Quartet’ of international negotiators (the US, the EU, Russia and the UN) requires the Palestinian Authority to reform its government and end militant attacks. Israel, for its part, must end settlement activity and support Palestinian democratic institutions.

2004, March 22: Sheikh Yassin, co-founder and leader of Hamas, is assassinated by an Israeli helicopter gunship.

2004, April 17: Abd al-Aziz al-Rantissi, co-founder of Hamas and successor to Yassin, is assassinated by the Israeli military.

2004, July 9: International Court of Justice rules that the Israeli separation barrier violates international law and must be removed.

2005, May 26: Bush meets Mahmoud Abbas, Palestinian president and leader of the Palestinian Authority (PA). Bush pledges $50m in aid to the PA.

2006, January 4: Sharon, Israel’s prime minister, suffers a stroke and falls into a coma.

2006, January 25: Hamas wins majority of seats in Palestinian legislative election. The US, Israel and several European countries cut off their aid to the Palestinians as the party rejects Israel‘s right to exist.

2006, March: The Kadima party takes the most seats in Israel’s legislative elections, with the ruling Likud party suffering a major loss.

2006, July 12: Islamic Resistance fighters from Hezbollah, a Lebanese Shia organisation, capture two Israeli soldiers and kills three other in a cross-border raid. Israel attempts to retrieve the men, and five more soldiers are killed. Israel bombards what it calls Hezbollah positions in Lebanon. Hezbollah responds by firing rockets into Israel. The conflict lasts for 34 days before a ceasefire is declared, pending the the deployment of a larger international peacekeeping force in southern Lebanon.

2006, September: Violence erupts between Fatah and Hamas factions in the Gaza Strip. Abbas attempts to prevent civil war. Abbas’s Fatah movement supports a Palestinian state alongside Israel, while Hamas rejects Israel‘s right to exist. Hundreds are killed in ongoing clashes between the factions as the Palestinian territories remain in political deadlock.

2007, September 6: Israeli fighter aircraft reportedly enter Syrian airspace and allegedly launch a raid on a nuclear facility. Syria denies that any bombs were launched at sites on its territory, and that the fighter jets only dropped fuel reserves after they were fired at by Syrian anti-aircraft posts.