A government decision in early 2007 to export a half-million tonnes of Pakistani wheat, after it over-projected the national harvest, has contributed to the shortfall.

This is prompting fears of further instability in the country.

Belated import
To cover the shortfall the government has resorted to importing wheat from Australia and Russia at 70% higher prices.
It is now being criticised for not preventing the looming crisis.
Pakistan is a nation of more than 160 million people who consume 22 million tonnes of wheat every year.
Part of the reason for this crisis is due to frequent power cuts that have badly affected industrial production of milling wheat into flour.
This has been coupled with the ongoing political turmoil in the country that has caused logistical difficulties.
Flour shortages have caused riots in Pakistan in the past and sensitivities run high whenever there are shortages.
The crisis has now prompted the government to increase security at the mills and secure the country’s vital food supplies.
It has deployed rangers and other paramilitary forces to guard mills and storehouses that hold stockpiles of wheat.
World shortfall
The problem is not entirely of Pakistan’s own making – there is a poor harvest of wheat across the world.
Speaking to Al Jazeera’s Kamal Hyder, Sheikh Muhammad Shabbir, a former chairman of the Pakistan Flour Mills Association, said despite the world shortage, the problems in Pakistan could have been avoided.
“In this year, [the] 2007/2008 crop, what we saw in the world is that grain, especially wheat grain, is short everywhere,” he said.
“That is another reason that the prices in the international world market went up because of the shortage of wheat”.
Pakistan had a bumper crop last year but instead of holding some of the wheat in storage, it exported much of the excess.
Shabbir says this was a mistake.
“The prices in the open market of wheat started going up. So we thought that the decision for the export of wheat at that time before knowing the actual size of the crop was not correct,” he said.
Blame game
Reports from Pakistan say opposition parties are staging rallies against shortages and blaming the government for the crisis.
The government, in turn, has established a special federal committee to review the wheat flour situation and to ensure that store owners do not sell more than the government specifies.
The utility stores have been selling flour at the official rate of 18 rupees ($0.30) per kg but it is sold in the unofficial market at around 30 rupees per kg.
Musharraf has blamed smugglers for the problem saying the shortage was due to wheat taken to Afghanistan, Central Asia and Russia.
He says he will use the army to solve the crisis and on 15 January media reports said Pakistani border force did not allow trucks to pass the border checkpost of Chaman.
Musharraff says the flour crisis is artificial but political experts warn that despite the shortages, Pakistanis must see tangible evidence on the ground.
Otherwise, the people fear that anger and hunger could escalate into further violence on the streets.
Source : Al Jazeera, News Agencies

Army says it has killed up to 50 fighters, among them Uzbeks, in South Waziristan. 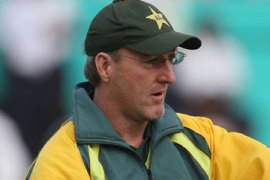 Pakistan to get psychological help

Coach Geoff Lawson wants to bring in a sports psychologist. 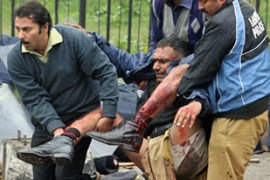 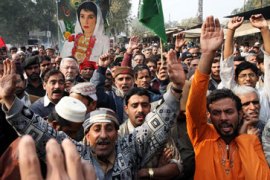