Nonetheless Chen continued to attack Chinese politicise towards the island, which it considers part of its territory.

“China shows no signs that it will ease its military threats, diplomatic suppression and two-handed economic strategy on Taiwan,” Chen said before heading on a week-long mission to shore up ties with Guatemala and St Lucia.

Beijing, he said, was “intensifying its ‘dollar diplomacy’ attacks on Taiwan and using all means possible to take away our allies. We cannot sit back passively… we have to step out for the international community to see Taiwan.”

Hsieh, the DPP’s presidential candidate and now party boss, has vowed to lift the morale of the party after Saturday’s defeat.

He adheres in principle to the DPP’s support for independence from China, but has rejected some of Chen’s policies towards Beijing, specifically Chen’s moves to limit economic ties with the mainland.

Speaking to reporters on Sunday Hsieh pledged to regain ground from the KMT and win the March 22 presidential vote, telling reporters that Taiwan needed a “check-and-balance power as one-party control of parliament would mean a setback for Taiwan’s democracy”.

But after Saturday’s landmark win, the KMT’s presidential frontrunner, Ma Ying-jeou, said it was clear that voters were “yearning for change after eight years of suffering”.

The KMT and its allies captured 86 seats in the 113-member parliament, compared to just 27 for the DPP, setting the stage for Ma to succeed Chen as the country’s president in March.

Ma, a former mayor of Taipei, has pledged to “push for a peace accord” with Beijing if elected, allow mainland tourists to visit Taiwan, and hopes to reinstate direct transport, commerce and postal links that were cut off six decades ago.

China and Taiwan split at the end of a bloody civil war in 1949 after the Communists beat the Kuomintang nationalist army fled to the island and formed a government.

The KMT ruled the island for more than half a century, before elections swept Chen to power in 2000.

His efforts to underscore Taiwan‘s distinctive cultural and historic roles have been popular with many Taiwanese who detested the Nationalists for their decades of authoritarian rule.

But Chen was criticised for provoking China with an aggressive pro-independence campaign and the KMT – for decades seen as anti-Beijing – has in opposition made a U-turn, pushing for stronger economic links to China.

A win in both the legislative and the presidential polls for the KMT could end years of political gridlock in Taiwan and pave the way for stronger ties with the mainland.

Beijing offered no official comment on KMT’s win, but editorials in Chinese state media welcomed the result saying it could see an improvement in relations across the often-tense Taiwan Strait. 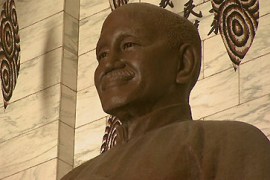 Taiwan vote raises debate over past 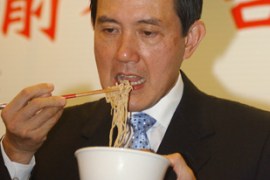 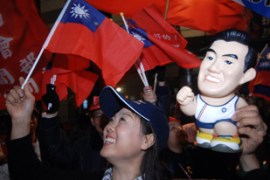