The Spanish bank will pay about $735m for the acquisition.

The Bradford and Bingley brand will remain for now but the accounts will transfer to Abbey.

The British stock market fell 0.49 per cent when it opened following the announcement. London’s FTSE 100 index of leading shares declined to 5,062.32
points in opening trade.

Bradford and Bingley is the second British bank to be nationalised this year and the latest of a number of high-profile US and European institutions to fall victim to the global credit crunch.

The government would have preferred a private-sector buyer to acquire the ailing British bank, but rivals appeared unwilling to take on the residential mortgage portfolio amid the credit crisis and weakening British housing market.

The deal further builds Santander’s influence in the British banking market after it agreed to buy another mortgage lender, Alliance & Leicester, in July.

Bradford and Bingley’s shares tumbled to a record low on Friday and closed at about $0.36, valuing the company at less than $548m.

The bank had announced on Thursday that 370 employees would lose their jobs in a bid to save $28m.

In August, the bank revealed net losses of $32m for the first half of 2008, attributing them to “turbulence in the banking and housing sectors”.

The financial crisis and Britain’s weakening economy have increased pressure on Gordon Brown, the British prime minister, whose party lags the opposition Conservatives in opinion polls and whose leadership has been questioned by some members in his own party.

Analysts say the nationalisation or takeover of lenders may lessen the availability of mortgages and exacerbate a downturn in Britain’s once red-hot housing market.

Elsewhere in the European banking sector, the governments of Belgium, the Netherlands and Luxembourg announced a $16bn bail-out for troubled financial services giant Fortis.

This followed emergency talks with Jean-Claude Trichet, the president of the European central bank, in a bid to prevent the credit crunch bringing down one of Europe’s top 20 banks.

In Germany, the country’s finance minister and banking regulator are also holding urgent talks with Hypo Real Estate, after its stocks plunged on Friday. 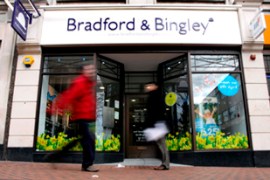 UK’s ninth-leading lender, Bradford and Bingley, set to be taken over by government. 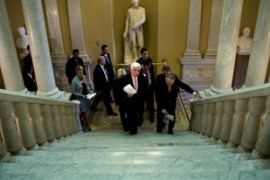 US legislators agree on rescue plan

Congress set to back $700bn bail-out plan that includes curbs on executive salaries.