A quick-count by Participacion Ciudadana, a pollster authorised by the election agency, showed Correa winning 65 per cent of the vote as polls closed on Sunday.

An exit poll by Cedatos-Gallup, a private opinion research firm, said 70 per cent of the 9.6 million voters backed the new charter that gives the president more power to regulate Ecuador’s economy which is based primarily on oil exports.

Correa issued a call for national unity, urging the opposition and all “no” voters to keep calm.

“We extend them our hand. Let them acknowledge defeat and let’s strike out together in the new direction the great majority of  Ecuadorans, as well as all Latin America, are setting: a society with more justice, much more equality and without so much … misery,” he said.

Branded as “hyperpresidentialist” by the opposition, the new constitution would allow the president to run for two consecutive, four-year terms, dissolve congress and call early elections.

Supporters say the constitution’s 444 new articles to expand the president’s powers are necessary to end political instability in a country that, in the last 10 years, has removed three presidents from office before their terms were finished.

The new constitution would also close down all foreign military bases in the country, forcing the US to pull out its regional anti-drug operations, which have run for nearly 10 years from an air base in the port city of Manta.

The new Basic Law was passed by the country’s constitutional assembly on July 24.

Correa, 45, has already announced his intention to run for re-election in February 2009, if the new charter is approved.

The president had already asked the Organisation of American States (OAS), in charge of election monitors, to validate the final vote tally.

“You have to remain very alert to the losing side’s usual argument discrediting a victory … as a fraud,” Correa told OAS officials earlier this week.

Enrique Correa, an OAS spokesman, said that his group has so far found “no signs of fraud in the works”.

Earlier this month Correa said the referendum was the “last opportunity for peaceful change in Ecuador”, in reference to the crisis in global capital markets.

Jaime Nebot, the leader of the opposition Social Christian party and the mayor of Guayaquil, has criticised the constitutional changes, which he says would create a centralised form of government that would threaten private property.

“Do you think we can model ourselves after Venezuela, a country swimming in oil money, but whose people have to line up to get food?

“Or Bolivia, a country split down the middle because its government doesn’t understand?” Nebot recently said.

Ecuador’s proposed changes are similar to those that have been made in Venezuela and Bolivia but fall short of nationalising the country’s resources as its neighbours have done.

The Roman Catholic Church, a major player in the predominantly Catholic country, has also criticised the new constitutional changes, in particular articles it says will lead to the legalisation of abortion and same-sex marriage.

About 60,000 police and military personnel were deployed around the country and sales of alcoholic drinks were banned from Friday until Monday. 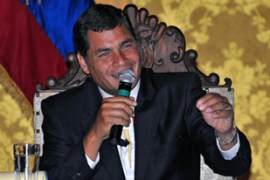 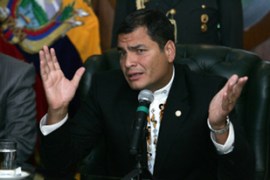