The explosion occurred during the morning rush hour with people heading to work, the officials said.

“The explosion was so big, it was deafening. Till now I can’t hear properly,” Khodr Kheireddine Hamad, a witness, said.

Police and the army immediately cordoned off the area as forensic experts began gathering evidence, while residents of the area rushed to the scene to look for loved ones.

Local television showed soldiers sealing off the area and preventing people from approaching the blast scene.

Sheikh Ali Hussein, whose brother-in-law Ali Mohamed Ali was killed in the attack, said most of the soldiers on the bus came from the Jabal Akroum region which straddles the border with Syria.

“I fear we are paying the price for our political choices in this country and for the battles taking place on the political scene,” he said.

The attack is the second bombing to target Lebanese troops in less than two months.

On August 13, at least 18 soldiers and civilians were killed by a roadside bomb packed with nuts and bolts when it exploded near a bus carrying troops on a busy street in Tripoli.

Nayala Khoury, an Al Jazeera producer in Lebanon, said: “There is always tension between various extremists and the army, but no one is taking responsibility for this just yet.”

Tripoli has been the site of a number of sectarian battles, with dozens of people killed or wounded in fighting over the summer between pro-government Sunni fighters and armed men from the Alawite sect, an offshoot of Shia Islam that is prominent in Syria.

In 2007, Lebanese troops clashed with members of the Fatah Islam group in a nearby Palestinian refugee camp. The three-month battle left hundreds of people dead before the army finally defeated the group.

“The problem was the 14th March [pro-government alliance] tried to create a militia to stand up against Hezbollah but in fact they have eased the way for these probably Sunni terrorists to infiltrate the country.”

Sheikh Daie al-Islam al-Shahal, founder of the Salafi Sunni movement in northern Lebanon, rejected suggestions that Sunni fighters had carried out the attack, saying it was part of the conflict among “external forces” in Lebanon. 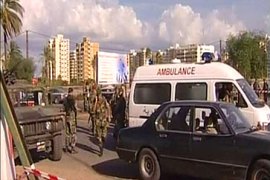