Separately, a maritime observatory reported on Saturday that a Greek chemical tanker with 19 crew members on board has been hijacked by Somali pirates in the Gulf of Aden.

The Belize-flagged Faina was hijacked on Thursday while en route to the Kenyan port of Mombasa with 33 T-72 battle tanks, grenade launchers, ammunition and spares for the Kenyan military.

The pirates are demanding that a ransom be paid for the seized vessel, Andrew Mwangura, a spokesman from the the Mombasa-based East African Seafarers’ Assistance Programme, said.

“The gunmen are demanding $35 million to release the MV Faina and her crew,”  he said.

The group has battled against forces from Somalia’s transitional government and its Ethiopian ally since since early 2007.

“I saw heavily armed pirates on board several speedboats heading towards Hoboyo where the hijacked ship is believed to be coming,” Adan Nile, a local fisherman, said.

Somali pirates typically take vessels they capture to the Eyl region, about 800km from Mogadishu, so the choice of Hobyo marks a departure for the rebels.

The military hardware on board the Faina was among the last of a series of shipments to Kenya, Valery Konovalyuk, head of a parliamentary committee that oversees Ukraine’s arms deals, said.

The Russian frigate Neustrashimy was despatched to the Horn of Africa region on Friday in the wake of the seizure of the Faina.

Igor Dygalo, Russia’s Navy spokesman, said the frigate was sent out due to “the rise in pirate attacks, including against Russian citizens”.

“In the future, the Russian navy will send its ships on a regular basis to zones where there is a danger from maritime piracy,” Dygalo told Russia’s Vesti-24 television station.

The Somalian coast has been a favoured region for pirates amid years of continuing instability across the country.

The nation has witnessed fierce fighting and lawlessness since Mohamed Siad Barre was removed from the Somalian presidency in 1991. 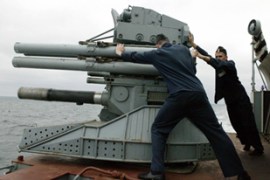 Warship heads for Somalia after Ukrainian freighter is hijacked.