Nic Borain, a political analyst, told Al Jazeera, that Motlanthe was considered a good compromise candidate to lead the country into the next election.

“He’s very much a caretaker candidate waiting for Jacob Zuma to take over next year … he’s a steady hand,” he said.

“He’s seen as very presentable and gives exactly the right image to the markets and, as a representative of the whole of South Africa, he is an entirely appropriate candidate.”

Asked about fears by some within the ANC that Motlanthe might turn out to be a rival to Zuma in next year’s elections, Borain said: “That’s always been something attributed to him mostly by the ANC Youth League … I think he’s a loyal Zuma person.”

“In a real way Zuma is the ANC’s candidate and Kgalema Motlanthe doesn’t have a constituency within the ANC anything like as powerful or as significant as Zuma has.”

Mbeki’s resignation came after a court threw out corruption charges against Jacob Zuma, the ANC leader and a rival to Mbeki, saying the prosecuting team violated some of Zuma’s procedural rights.

Mbeki said the government “never compromised the right of the national prosecuting authority to decide whom it wished to prosecute or not to prosecute”.

But he faced criticism over the allegations that he pushed for corruption charges to be brought against Zuma.

The incident exposed rifts in the ANC and the party asked him to step down.

Officials said that Mbeki would not attend the swearing in ceremony of his successor on Thursday.

“Mbeki was invited but has declined,” an official in parliament’s protocol office said.

“It’s devastating news that President Thabo Mbeki is no longer the President of South Africa, but that is the action of the South African people,” Zimbabwean state media reported him as saying in New York, where he is attending the UN general assembly.

Although Mbeki was frequently criticised for taking a soft line with Mugabe in a year of negotiations, he managed earlier this month to broker a power-sharing deal to end Zimbabwe’s political crisis, though Mugabe and the opposition are still at loggerheads over cabinet posts. 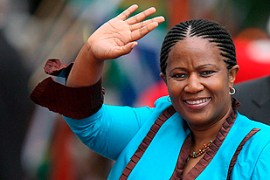 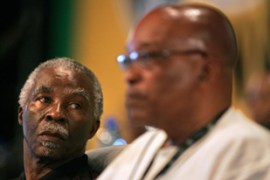