Mena, Egypt’s official news agency, however, stated that negotiations were still under way to secure the release of the hostages.

Al Jazeera’s Amr el-Kahky, reporting from Cairo, also said his contacts on the ground had failed to confirm the release.

There was more confusion as Zoheir Garrana, the Egyptian tourism minister, said only the Egyptians among the hostages were freed.

The Italian foreign ministry and Egyptian security sources earlier confirmed the abduction of the group, which included at least five Italian nationals.

“Foreign minister Franco Frattini… is following the matter of the kidnapping in Egypt of a group of foreigners including five Italians,” the ministry said in a statement.

The other people seized were eight Egyptians, five Germans and one Romanian.

Garrana described the abductions as “a gang act [by] masked men”.

Mustapha Tawfiq, chief of police in the southern city of Aswan, told state television that four men abducted the group near Gilf el-Kabir, an uninhabited region near the borders with Libya and Sudan.

Egyptian sources said the kidnappers had asked for between four and six million dollars in ransom, although it was not possible to confirm the sum.

Garrana later said the hostages “had been moved outside the Egyptian borders”.

Al Jazeera’s el-Kahky said that it was believed the victims were taken to northern Sudan across Egypt’s border. 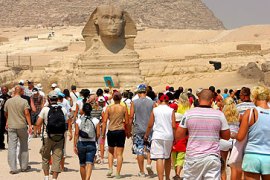