Cyprus’ rival leaders have begun their first solid talks on reunification and power-sharing in what is seen as the best chance in years of resolving differences on the divided island.

Barnaby Phillips, Al Jazeera’s Europe correspondent, spoke to two Cypriots from either side of the island, one of whom believes that the two communities are slowly coming together, the other who fears they are drifting apart.

“Not a chance,” the café owner was emphatic, “not one chance”, he said, jabbing his finger at me to make the point, “this peace process will go nowhere”.

It was just one opinion, from the Greek side of the divided island of Cyprus, but it was depressing to hear, nonetheless.

After all, we had come to Cyprus to cover the start of formal reunification talks between the Greek and Turkish communities.

And, so we had been told, this is Cyprus’s best, maybe last, chance of bringing the two sides together.

In truth, my café owner, in the heart of the capital Nicosia, is not alone in his bleak assessment.

One senior Western diplomat in the region told me, only half in jest, that “when it comes to the Cyprus problem, there are two kinds of people; pessimists, and those who haven’t been here long enough to be pessimists”.

It’s easy to list the reasons why this peace initiative might fail, like all the others before it in the 34 years since Turkish troops landed on Cyprus in response to a coup by officers of the Cypriot National Guard seeking unity with Greece.

There is the difficulty of restoring property and/or paying compensation to the many thousands who were displaced in the fighting in 1974.

Then there is the challenge of finding a workable power-sharing arrangement between Greek and Turkish Cypriots, and of securing consensus on the withdrawal of Turkish soldiers, and so on.

The optimists, and there are a few, say that things might be different this time.

That’s because the respective leaders on Cyprus, Demetris Christofias and Mehmet Ali Talat, are serious about following these talks through to their conclusion. The friendship between the men goes back many years.

But that may not be enough.

If the Cyprus problem is to be solved, both leaders are going to have to tell their people some awkward facts.

For example, many of the displaced will not get their homes or land back, and the families of those listed as “missing” will have to come to terms with the fact that their loved ones are dead.

Cypriots have listened to nationalist rhetoric for decades, and now must accept some very bitter truths.

On the Turkish side of the island, I heard grumbling that Talat may not have the charisma or dynamism to convince his people to embrace reunification, especially after the disappointment of 2004, when Turkish Cypriots accepted a UN plan, but Greek Cypriots rejected it.

Talat is in an awkward position.

He gets irritated when reporters ask him whether he has the backing of the Turkish government in Ankara.

“Why do you always ask me about them?” he demands.

But the truth is that there is no peace in Cyprus without the support of Turkey.

Ultimately, Turkey’s government, [and generals], are going to have to agree to withdraw tens of thousands of Turkish soldiers from northern Cyprus.

In this regard, the recent decision of the constitutional court in Ankara not to shut down the governing AKP may be good news for Cyprus.

If the AKP had been removed from power and Turkey had entered a period of uncertainty or resurgent nationalism, it is hard to imagine how progress would have been made in Cyprus.

Rana is optimistic; because the two leaders are “pro-peace” and committed to a solution.

She believes that a new peace process will create its own momentum, and that “the communities will become closer in the coming year, as the negotiations take place, because we’ll be thinking in terms of a unified Cyprus”.

On the other side of the line that divides Cyprus I met Nikkos Karoulas, a Greek Cypriot, who was born in Famagusta but was forced to flee from that town when he was 15 years old, as Turkish soldiers approached.

Nikkos is an engaging man, who wears his heart on his sleeve.

Like many Greek Cypriots, he still mourns the loss of his beloved Famagusta, but unlike many of his compatriots, he works hard to maintain links with the Turkish Cypriots who live there today.

He travels north to Famagusta every week, to meet friends and get involved in projects to conserve the city’s medieval architecture.

Unlike Rana, Nikkos firmly believes, and fears, that this peace process is the last chance for Cypriots to reunify their island.

This is for the depressing reason that a new generation has grown up since 1974 that neither knows nor cares about Cypriot unity.

“They are used to the isolation”, Nikkos says, “their life is limited to a border line, whereas our generation is the last that has the experience of common life, of sharing thing, with a past”.

I’m not sure who is right; Rana, who believes that two communities are slowly coming together, or Nikkos, who fears they are drifting apart.

But any visitor to Cyprus can see that many of the island’s problems are so pressing that they can only be solved when Greek and Turkish people work in unison, and stop living in their own parallel worlds.

Many of the worst problems are environmental. Both sides of the island have been ravaged by ugly development, motivated by short-term greed.

Everyone is complaining about water shortages, and the desertification of farmland.

If Cyprus is to regain its reputation for beauty and cultural wealth, Greek and Turkish leaders are going to have to make some very bold decisions.

And they must accept that, sharing one small island, their destinies are entwined. 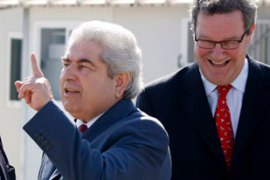