However, the family of Kassem Mughrabi said that the incident was an accident.

Mahmoud Mughrabi, Kassem’s father, said his son did not have a driving licence and apparently lost control of the car.

“What happened yesterday was a natural road accident. Israel has more 7,000 road accidents a year, not one or two,” he said.

“This is a road accident like any other one. The difference here is that they killed my son in cold blood, the car stopped after hitting a wall. It wasn’t moving, why kill him?”

Mahmoud Mughrabi said that he wished the soldiers, two of whom were reported to be in serious condition, a speedy recovery.

Kassem Mughrabi’s sister Rasha said he had told her he was going out with friends and would soon return home.

The injured Israeli soldiers were on a tour of Jerusalem ahead of the Jewish New Year holiday next week and were waiting at the intersection near the occupied Arab section of Jerusalem when they were hit.

Shmuel Ben-Ruby, another police spokesman, said they were still treating the incident as an intentional attack and information suggested that disappointment over a failed romance might have been the motive.

He said investigators had found that Mughrabi, who had no prior police record, “wanted to marry his cousin but when she refused he apparently decided to carry out the attack”.

Ben-Ruby said that the car struck a traffic island and then careered on to a sidewalk, driving for several metres before striking the soldiers and then a wall.

The men had killed three people and wounded several others before being shot and killed by police and soldiers.

In March, eight students at a Jewish religious college were shot dead by another Palestinian East Jerusalem resident.

The practice of destroying Palestinian attackers’ homes was halted several years ago after an Israeli Supreme Court justice ruled it did not deter attackers, but Ehud Barak, Israel’s defence minister, called on Tuesday for Mughrabi’s home to be “destroyed as soon as possible” in order to dissuade others from carrying out similar acts. 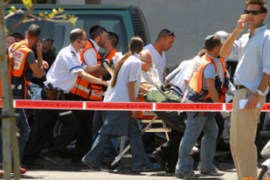 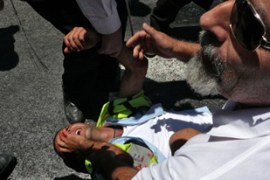 Three people dead after man rams bulldozer into a bus and several cars in central Jerusalem. 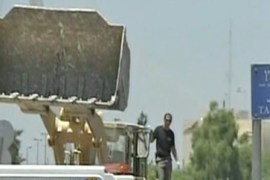 A man goes on a deadly rampage in Jerusalem before police stop him by shooting him dead. 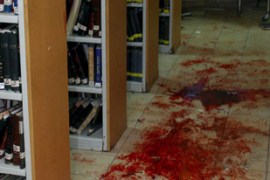