In addition to the dozens killed, at least 270 people were injured in the attack on the hotel, a favoured place for foreigners and the wealthy elite.

British Airways announced on Monday that it was temporarily suspending flights to and from Pakistan, citing security concerns after the hotel bombing.

The airline, which offers six flights to Pakistan each week, did not face a direct security threat, but took the step out of caution, Suhail Rehman, a BA spokesman, said.

One of the lines of inquiry taken by Pakistani investigators is that the bomb attack was carried by an al-Qaeda cell operating in Islamabad.

They said that the attackers constructed the 600kg truck bomb at a safe house in the capital because vehicles entering the city are subject to routine searches.

“Our focus at the moment is to track down the network in Islamabad which must have facilitated the movement and construction of the bomb,” a senior official said.

Video footage of the attack showed the truck failing to break down a security barrier at the entrance to the Marriott hotel.

Security guards at the five-star hotel tried to put the resulting fire with extinguishers before the full bomb detonated, devastating the complex.

Two Americans, the Czech ambassador to Pakistan and a Vietnamese woman were among those killed in Saturday’s attack.

A Danish intelligence agent is still missing after the blast.

“Carrying 600 kilos of explosives over long distances and through checkpoints is not possible, so our immediate suspicion is that the bomb was loaded in Islamabad,” the official said.

It is possible that the explosives used in the bomb could have been sneaked into Islamabad in small quantities from the tribal belt bordering Afghanistan, he said.

A senior Pakistani security official said on Monday that the explosives used in the bombing were like those used in two recent deadly attacks.

“We are collecting evidence. The explosives were similar to those used in the Danish embassy, which was claimed by al-Qaeda, and the attack on the ISI (Inter Services Intelligence) camp in Rawalpindi last year,” the official said.

An al-Qaeda leader claimed responsibility for the attack on the Danish embassy, but no group said it had targeted the ISI facility.

Asif Ali Zardari, Pakistan’s president, said after the Marriott attack that the government will take a tough line against fighters linked to the Taliban and al-Qaeda.

Pakistan’s military is currently trying to bring under control of the country’s tribal region bordering Afghanistan, an area long considered to be a safe haven for opposition fighters. 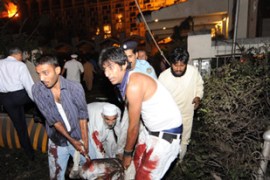