“There has been an incident in a test,” James Gillies, a Cern spokesman speaking in the Swiss city of Geneva, told the AFP news agency on Saturday.

“One section of the machine will have to be repaired.”

As the sector where the fault occurred will have to be warmed up for repairs to take place, the Large Hadron Collider (LHC) is expected to be halted for “a minimum of two months”.

The LHC was started on September 10, but it had to be shut down because of a fault in the cooling system.

It was turned back on again on Friday, but the latest incident has once again forced operations to halt.

The LHC took nearly 20 years to complete and, at six billion Swiss francs ($5.46bn), is one of the costliest and most complex scientific experiments ever attempted.

It aims to resolve some of the greatest questions surrounding fundamental matter, such as how particles acquire mass and how they were forged in the big bang that created the universe some 13.7bn years ago.

More than two thousand scientists from around the world have worked on the project, which hopes to observe a particle known as a Higgs Boson, or the “God particle”, that scientists hope will explain how particles pick up mass.

The Higgs was named after Peter Higgs, a British physicist who devised the theory of its existence in 1964.

Archana Sharma, a physicist with Cern, told Al Jazeera recently that the experiment could be equated to the discovery of X-rays or electricity.

“We are precisely at that kind of moment in science -something new is going to come about,” she said.

“In addition, there are theories – to be technical – that explain the universe on the astronomical scale and their are theories that explain it on a subatomic scale … There is a connection between these two where the origin of mass is explained by a mechanism called the Higgs mechanism. Our primary scientific goal is to find the Higgs.”

The collider will send protons in opposite directions along a 27km circuit – the protons will travel the 27km 11,000 times per second – and at four points the protons will intersect and smash together.

Scientists will monitor the collisions and collect data on the particles created by these collisions, which they say will come close to re-enacting the big bang – the theory that a colossal explosion created the universe.

The project could also help prove the theory of supersymmetry, a theory in particle physics that suggests every particle has a corresponding partner particle. 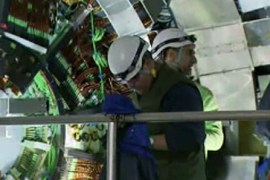 Swiss scientists to simulate creation of the universe.