Rejecting a Russian “sphere of influence” over its neighbours, she said she hoped its leaders would “overcome their nostalgia for another time”.

“We cannot afford to validate the prejudices that some Russian leaders seem to have: that if you pressure free nations enough – if you bully, and threaten, and lash out – we will cave in, and forget, and eventually concede.”

Rice said Moscow had taken a “dark turn” that left its reputation worse than at any time since 1991, when it emerged following the fall of the Soviet Union.

The US’ most senior diplomat said the invasion of Georgia last month was “a watershed” in US-Russia relations, but said that Washington would continue to pursue areas of common concern including nuclear weapons on the Korean peninsula, Iran and what she called terrorism.

She said the US and Europe must continue to oppose any Russian action in Georgia, adding: “Not in Georgia. Not anywhere.”

“Our strategic goal now is to make it clear to Russia’s leaders that their choices are putting Russia on a one-way path to self-imposed isolation and international irrelevance.”

Rice said that Russia’s behaviour threatened its participation in
a number of global diplomatic, economic and security bodies.

She also scoffed at Moscow’s recent dispatch of a “few aging Russian bombers” to Venezuela, whose president, Hugo Chavez, remains a vocal critic of Washington.

Rice, a former Soviet expert, called Sergei Lavrov, the Russian foreign minister, to tell him she was to make the critical speech.

She also said the door remained open for Georgia and Ukraine to eventually join the Nato military alliance.

Moscow later recognised South Ossetia and another breakaway region, Abkhazia, as independent states, and signed treaties on Wednesday to protect them from Georgian attack. 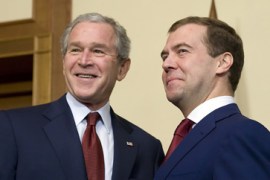 Historian says Russia is no match for the West, despite all the rhetoric. 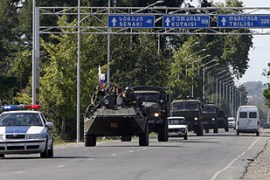 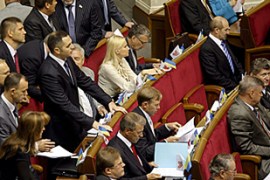