“I’ve got to buy it, but it is really expensive,” said Anna Petrucci, another customer.

But bakers say the cost of wheat is only one of their expenses and they are having to pay increased costs in electricity and salaries in order to keep their bakeries running.

“Bread is expensive but if the workers want an increase in salary the bakers have to pay them – we are just caught in the middle,” said Matilda Sereni, a customer.

Bakers are upset that the strike has been called saying they are being picked on by consumer groups and unfairly accused of speculation.

“The figures we have is that an Italian family buys about 300 grams of bread a day. With the increase in price it works out at about an extra two or three cents a day,” said Fabrizio Rosciolo, a baker. The increase is less than a cup of coffee per month, he added.

“People should really try and understand what the cost is of producing bread, with the costs of setting up a bakery and running it,” said Giuseppe Bernadino, another baker who said the price of wheat was only a small part in the cost of making bread.

In a consumer group demonstration outside the prime minister’s office in central Rome, women baked bread ready to hand out to passers-by.

“There is no reason why wheat prices are falling and the price of pasta rises or the price of crude oil falls and petrol rises, they are all speculators that, with the help of the government who does nothing to stop hem, are making all of us poorer,” said Carlo Rienzi, the president of the Codocoms consumer group.

“We have to stop this before it gets out of control, we have to stop the rise in price of food and energy costs,” said Carlo Pileri, president of the ADOC consumer group. 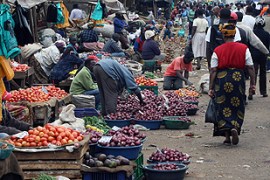