“We have very vital clues, positive clues, we are very hopeful we will solve this case,” Bhagat said.

Police said they were also studying footage from close-circuit television cameras at two of the markets hit by bombs.

Six explosions hit five separate areas in New Delhi’s bustling business district within minutes of each other on Saturday. Nearly 100 people were also wounded in the blasts.

Minutes after one of the explosions, police detained an 11-year-old balloon seller who claimed to have seen two men drop a black plastic into a dustbin which then blew up.

“They were tall men, wearing black clothes,” the boy told reporters before being taken away by police.

India has been placed on high alert following the attack, with security tightened at airports, railway stations and city centres. The Delhi metro system was also shut.

The bombings in New Delhi came after similar attacks in Jaipur, Bangalore and Ahmedabad which claimed more than 100 lives and injured many more in recent months.

Indian newspapers ran headlines including “Now Delhi”, “Capital Terror”, and “Terror 9/13”. The banner headline of the Sunday Times newspaper asked if the city’s residents were “Helpless?”

“Everybody is scared and nobody is secure. The situation in Delhi is really bad. It is very difficult to ensure safety and security in Delhi, as there are so many people,” Ramesh Mehra, a Delhi resident, said.

“How is it possible to keep a track on people, trace them and arrest them? Nobody can help it, police cant’ help it, the only thing is the moment you catch them they should be hanged then and there.”

Media reports said that the e-mail threat purportedly from the so-called Indian Mujahidin was traced to a Mumbai suburb.

A similar message sent before a series of bombings which killed at least 45 people in the western city of Ahmedabad in July was also sent through a hacked wireless connection in the region.

India’s NDTV reported the e-mail as saying: “In the name of Allah, the Indian Mujahidin has struck back again.”

Little is known about the group who also threw down a challenge to India’s security agencies in the e-mail, saying “do whatever you want and stop us if you can”.

Security services have suggested that it may be a front for other groups banned by the government over the past few years, such as the Students’ Islamic Movement of India. Others have said the group could be a loose coalition of the Pakistan-based Lashkar-e-Taiba and Jaish-e-Mohammed groups. 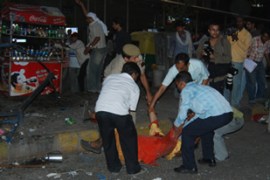 Up to 20 people die as six explosions hit New Delhi within minutes. 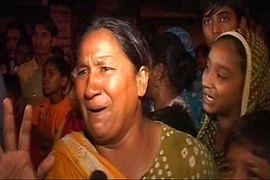 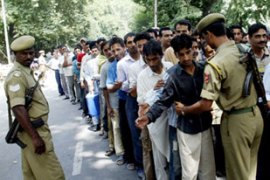 Major cities on high alert as Ahmedabad toll rises to 45 dead and over 150 wounded. 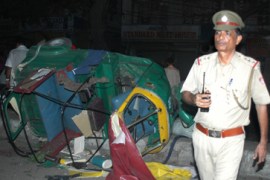