Twenty seven members of parliament are to be elected in indirect voting between Tuesday and Thursday, with 24 seats reserved for women, two for youth representatives and one for a representative of the disabled.

Kagame on Monday said he was confident of victory as polls opened.

“I have no reason not to be confident,” he told reporters as he cast his ballot on Monday.

But the overall election results are thought to be a foregone conclusion as no opposition party challenged the RPF.

The opposition in the small central African country is made up of about a dozen parties which have been in exile since the end of the genocide and did not field candidates.

“The UDF are of the view that so long as one political party, the RPF, monopolises all the state machinery, decides which party or individual can contest elections, seals off all the country during the electoral process, elections will amount to a smoke screen,” it said in a statement last month.

Rwanda has been praised for its economic reforms since the genocide  – which saw hundreds of thousands of minority Tutsis massacred – ended.

Since Kagame, a Tutsi, took power in 2000, Rwanda has attracted growing foreign investment.

“I think those achievements will be speaking by themselves,” Kagame said.

Rwanda’s hybrid electoral system has made it one of the only countries in the world with a near gender-equal parliament – in the outgoing house, 48 per cent of the members were women.

The proportion of women in politics is also a result of the imbalance in the country’s population – so many men having been killed in the genocide and others having fled.

In the first parliamentary elections held in Rwanda, in 2003, since the genocide in which 800,000 people were massacred, the RPF secured 74 per cent of the vote. 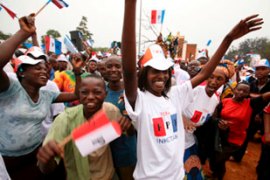 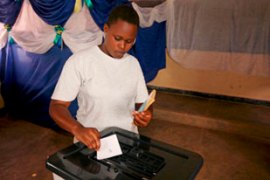