The gathering, which includes Michelle Bachelet, the Chilean president, and the leaders of Argentina, Brazil, Colombia, Ecuador, Paraguay and Uruguay, was expected to continue until late on Monday.

The violence has also sparked a diplomatic standoff between Bolivia and Venezuela on the one side, and the US on the other, with Morales and Hugo Chavez, the Venezuelan president, expelling Washington’s ambassadors to their countries, accusing them of backing the opposition.

Washington responded by ordering the Bolivian and Venezuelan envoys to the US to leave.

“They are trying to overthrow president Evo Morales and the conspiracy has been born of, financed by and supported by the United States empire,” Chavez said on arrival in Chile.

Luiz Inacio Lula da Silva, the Brazilian president, is seen as being influential at the talks as Brazil is Bolivia’s top foreign investor and is heavily dependent on its natural gas exports.

The group of South American leaders hopes to repeat the success of a similar summit in March that managed to stop violence erupting between Colombia, Venezuela and Ecuador after a Colombian raid on a rebel base inside Ecuador.

Before heading to Chile, Morales and one of the rebel governors met to discuss potential steps to end the violence and agreed to resume the talks when Morales returned.

Violence between pro- and anti-government protesters last week left at least 18 people dead and 100 wounded in the northeastern regions.

The army has arrested 10 people accused of organising anti-government protests in Cobija, the capital of Pando province.

Officials have said 16 to 28 people died in that incident in rural Pando, as well as two more in Cobija.

The government also has accused Leopoldo Fernandez, the governor of Pando, of involvement in the deaths, alleging the peasants were gunned down in an ambush.

South America’s poorest nation has been in the grip of political turmoil for months.

Last month, Morales convincingly won a referendum on his rule but in the rebel states, voters also returned most of the governors forming the opposition coalition.

After failed negotiations to find a compromise solution, Morales announced a new referendum to take place in December.

The new vote would be on his rewritten constitution, which would redistribute land and national revenues to give more to the indigenous population. 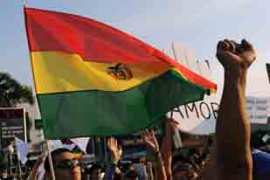 Leaders to meet on Bolivia crisis

Talks come as toll from violence rises and Morales struggles to assert control. 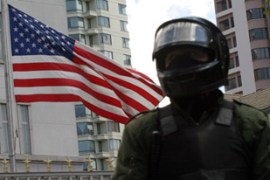 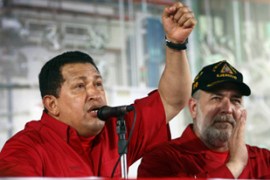