“We expect Fema [the Federal Emergency Management Agency] to deliver these supplies, and we will hold them accountable,” Bill White, the mayor of Houston, said.

Millions of people have been left without power following the storm.

Some two million people fled the region ahead of the storm while about 2,000 were rescued from flooded areas.

Ike ploughed  through Texas after slamming into the state’s coastline early on Saturday, shredding the island city of Galveston.

“It’s pretty obvious there was substantial and long-term damage done to Galveston Island,” Rick Perry, the governor of Texas, said after flying over the historic coastal community.

In Houston, the city’s business district was under a layer of foul smelling mud and sewage.

Restoration, relief and rescue efforts were hampered by downed trees and other damage but flood waters were receding in some areas.

Houston’s airports were closed when the storm approached.

The storm halted crude oil production in the Gulf of Mexico, representing a quarter of US output.

The US coast guard said the storm damaged some offshore oil production facilities but did not yet know the extent.

George Bush, the US president, is due to visit Texas, his home state, on Tuesday to assess the devastation.

Damage assessment has barely begun but early estimates suggest the bill could rise to $18bn. 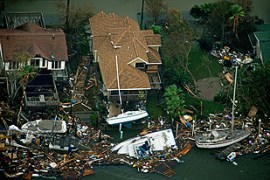 US counts the cost of Hurricane Ike

Insurers estimate claims of up to $18bn after floods and heavy rains batter Texas. 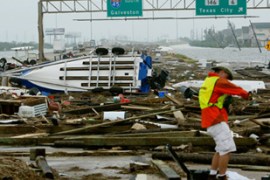