“According to the latest information, the airplane fell into a ravine near the city limits. There were 82 passengers plus a baby and five crew on board, and by preliminary information, they are all dead,” Vladimir Markin, an air investigator, told the RIA Novosti news agency.

“The Trans-Siberian Railway was damaged due to the accident,” Markin said.

The Interfax news agency quoted Irina Andrianova, an emergencies ministry spokeswoman, as saying: “We have found the aircraft.

It came down within the city limits [of Perm] in a patch of waste ground.

“The airplane took off from Moscow’s Sheremetyevo airport at 01:12am on Sunday [21:12 Saturday GMT], but as it was landing, at the height of 1,800m we lost contact with it,” Andrianova said.

Local media reported that firefighters had extinguished a blaze at the crash site.

Andrianova said there were no deaths on the ground and that there was no indication of a terrorist attack.

Valery Tivunov, a Perm emergency official, said in televised comments that the plane crashed  just a few dozen metres from an apartment building.

Pavel Shevchenko, a 36-year-old Perm resident who lives just 300m from the site of the crash, said he was awoken by an explosion and ran outside.

He told the Associated Press news agency that debris was scattered around the area, along a section of tracks destroyed by the impact of the plane, but the heat from the flames kept him from getting closer.

Shevchenko said a neighbour who witnessed the crash told him the plane hit the ground sharply, at a 30 or 40 degree angle.

“At this stage it looks as if there was a catastrophic failure in one of the engines,” Al Jazeera’s Alan Fisher, reporting from Moscow, said.

“Investigators have recovered the black box so that will obviously play an important part in their findings and their investigations.

“Relatives have been turning up at the airport here in Moscow, and also in Perm, looking for news. Aeroflot itself has said it will compensate all the families of the passengers on board with up to $80,000,” Fisher said.

Aeroflot also said it had set up crisis centres for the victims’ relatives both in Moscow’s Sheremetyevo-1 airport and in Perm.

The Russian emergency situations ministry considered sending a rescue team to the site from Moscow, but later reported that “Perm had sufficient resources to deal with the search and rescue mission and decided to delay sending out experts from Moscow”.

An air safety commission announced in January that the average age of the country’s international airliners was 18 years, and its regional jets 30 years.

“Aeroflot has a good reputation in the field of safety,” Lev Koshlyakov, Aeroflot deputy director, told reporters at the airport. The incident is “a hard blow for our reputation”.

No problems were reported with the 15-year-old jet when it was last inspected at the beginning of 2008, Koshlyakov said.

Sunday’s crash was the second involving a Boeing 737 in the former Soviet Union in the past month. An airliner flying from the Central Asian nation of Kyrgystan to Iran crashed shortly after take-off on August 24, killing 56 people. 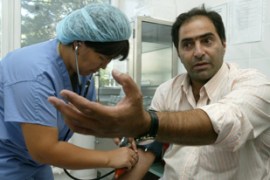 Kyrgyzstan is holding a national day of mourning after 65 die in air crash. 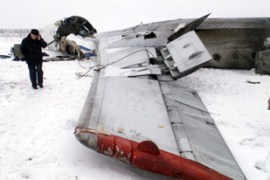 Passenger jet breaks up on landing in central Russian city of Samara. 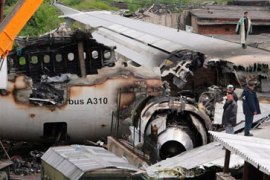