Nearly one million people had fled from Galveston Island and other low-lying areas after authorities issued a mandatory evacuation order, but thousands of people remained to sit out the storm.

“Some people did not evacuate when asked,” Bush said, referring to thousands of people still in Texas and Louisiana.

“I’ve been briefed on the rescue teams there in the area … Obviously, people on the ground there are sensitive to helping people and are fully prepared to do so,” he said.

He said that 20-metre-long yachts have been swept inland on floodwaters and that Galveston’s infrastructure is in ruins.

The US National Weather Service had earlier warned that people in coastal areas could “face the possibility of death” if they tried to ride out the storm.

Hours after the storm reached land, Rick Perry, the governor of Texas state, said  that Ike did not cause the worst-case scenario initially feared.

“Fortunately, the worst-case scenario that was projected in some areas did not occur, particularly in the Houston ship channel,” he said.

“But there is plenty of damage out there,” Perry said.

Officials in Texas are now mounting an operation to rescue those who ignored the evacuation order.

Andrew Barlow, spokesman for the Texas governor’s offices, said: “The unfortunate truth is we’re going to have to go in … and put our people in the tough situation to save people who did not choose wisely.

“We will probably do the largest search and rescue operation that has ever been conducted in the state of Texas.”

Authorities in three counties alone said about 90,000 people had stayed behind, ignoring the evacuation order.

The US federal emergency management agency said more than 5.5 million prepackaged meals were being sent to the region, along with more than 230 generators and 5.6 million litres of water.

Ike steered a path away from the centre of Houston, the fourth-largest city in the US, and oil and gas refineries were not hit by the eye of the storm.

But fuel prices rose on Saturday due to refineries closing down while waiting for the storm to pass.

About three million people were reported to be without electricity in the Houston area and suppliers warned it could be weeks before services were fully restored.

In central Houston, about 80km inland from Galveston, businesses were closed and windows boarded up in readiness for the storm.

Ike comes in the midst of a heavy storm season in the US and Caribbean and just 10 days after hurricane Gustav struck the US coast.

Thunderstorms shut down schools on Friday and knocked out power throughout southern Louisiana state, while around 1,200 people sought refuge in government shelters.

The hurricane has already battered the Caribbean, causing at least four deaths in Cuba, where about 2.6 million people were evacuated, and thousands of buildings and crops damaged. 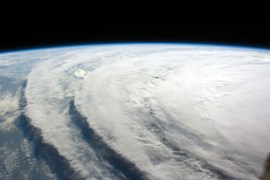 Hurricane Ike bears down on US