Gounon said the north tunnel where the train caught fire would be closed “for several weeks”.

“By luck there is the south tunnel which is absolutely intact,” he said.

However, Eurostar, which operates the passenger service through the tunnel, said in a statement, that it did not expect to resume service on Friday.

The blaze is among the most serious incidents in the history of the 50km tunnel, which opened to passengers in 1994.

Eurotunnel shares dropped four per cent after the fire broke out and another 3.2 per cent in early Paris trading.

The company, which has been plagued by financial troubles, assured investors in a statement that any financial impact of the accident “will be limited”.

The fire broke out on Thursday. A Eurotunnel official, who wished to remain anonymous, said the fire started about 11km from the French side of the tunnel at 1400 GMT.

Michele Alliot-Marie, the French interior minister said that firefighters got the blaze under control within two hours, but were not able to immediately put it out because temperatures that remained as high as 1000 degrees centigrade inside complicated their effort,

Two of the people injured in the fire “said they heard an explosion followed by flames”, Michele Alliot-Marie, the French interior minister, said.

The cause of the fire remains unclear.

Eurotunnel and local officials could not confirm whether there had been an explosion and Gounon said he had no reason to believe the fire could have been a “criminal” act.

The Channel Tunnel is composed of three tunnels, each 40 metres beneath the sea bed.

One tunnel carries shuttles, Eurostar passenger trains and freight traffic from France to England, while another runs in the opposite direction.

The pair are connected to a central service tunnel, used for maintenance and emergency access. 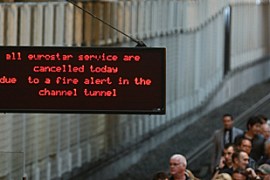