Treaty of Guarantee allows Greece, Turkey and Britain to intervene in disputes. Britain has sovereignty of two bases on the island.

1967 – Military government seizes power in Greece, relations between Makarios and the generals in Athens are increasingly strained.

The coup quickly ends and Greece’s military government collapses. Turkish forces occupy one third of the island and it effectively becomes partitioned.

1983 – Turkish Cypriots proclaim independence as Turkish republic of Northern Cyprus – but it is only recognised by Turkey.

1985 – No agreement at talks between Denktash and Spyros Kyprianou, the Greek Cypriot president.

2006 – Turkey’s EU entry negotitations break down over Turkey’s continued resistance to opening its ports to traffic from Cyprus.

April – Ledra Street is opened for first time since 1964.

July – Christofias and Talat agree enter direct peace negotiations on September 3, with a solution to be put to simultaneous referendums. 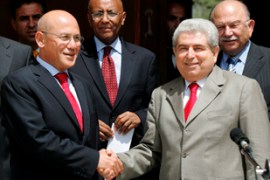 UN says negotiations to end 34-year divison of island will begin on September 3.

Greece’s prime minister has given luke-warm support to a United Nations plan to end 30 years of division in Cyprus just days ahead of an April 24 referendum.

The Turkish Cypriot leader has said he is ready to meet Tassos Papadopoulos, the president of Cyprus, on the future of the divided island, and anticipates seeing him in July.

With Turkish Cypriots divided right down the middle on the island’s future after the 14 December general elections, many are now anxiously awaiting the outcome of an intense period of political bargaining.