Harper said: “They will choose between clear direction or uncertainty, between common sense or risky experiments, between steadiness or recklessness.”

The Conservative party must win an additional 28 seats to gain a majority in
parliament, and analysts say they have a better chance of doing so now rather than later.

Harper has said in recent weeks that elections are needed to deal with a possible recession. Manufacturing sectors in the most populous provinces, Ontario and Quebec, are suffering due to the global economic slowdown.

Harper used the announcement on Sunday to tell opponents that criticism of his government “masks unclear and risky agendas”.

“This government will continue to lead Canada by keeping taxes down and keeping the budget in surplus and limiting spending to clear and affordable objectives,” he said.

Harper will press economic issues in his campaigning and oppose an energy tax proposed by the Liberal party.

Robert Bothwell, director of the international relations programme at the University of Toronto, said: “Harper is going for a majority government. That is really the only issue.” 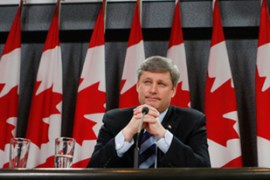