Kamalata Numa, Unita’s secretary general, said on the party’s radio station: “We will continue to voice our argument.

“The first step is to raise our issues with the CNE [electoral commission] and later we will also involve the constitutional court on the unconstitutionality of the electoral process.”

Luanda is home to 21 per cent of Angola’s estimated 8.3 million registered voters and is considered a stronghold for the ruling Popular Movement for the Liberation of Angola (MPLA).

The MPLA, which is led by Angolan president Jose Eduardo dos Santos, is widely expected to win the election and extend its uninterrupted 33-year rule.

About 320 polling stations are open in the capital to allow those who were unable to cast their vote on Friday to choose their preferred candidate.

In Rocha Pinto, a town close to Luanda, electoral officials have already started to count votes on Saturday after they ran out of ballot papers a day earlier.

Election observers from the European Union (EU) are monitoring the extending voting period, a day after their mission called the election process a “disaster”.

Earlier on Friday, Asaias Samakuva, Unita’s leader, said after meeting the head of the electoral commission that “the system practically collapsed and we have to do something to recover the process”.

Ngola Kabangu, the leader of opposition party the National Liberation Front of Angola (FNLA) said the election had been “extremely flawed”.

But the head of the Southern African Development Community (SADC) observer mission said on Saturday that the elections were transparent and credible.

Al Jazeera’s Stefanie Dekker, reporting from Angola, said that while polling had been extended, it was unlikely there would be a re-run.

“People were very patient … the organisers are the ones who have messed up here today,” Dekker reported on Friday.

The MPLA appears confident that Angolans will vote to keep it in power.

The MPLA hopes to boost its share of the 220-seat parliament, possibly winning a two-thirds majority that would allow it to amend the constitution.

The ruling party held 129 seats going into the election, with the remainder mostly controlled by Unita.

Unita hopes that discontent over the government’s failure to address economic issues will win the party fresh support.

The parliamentary vote is the first in Angola since the end of the country’s 27-year civil war in 2002, in which at about 500,000 people died.

There was an attempt to hold a vote in Angola in 1992 but that election failed when Jonas Savimbi, the former Unita leader, withdrew from the second round of a presidential poll after accusing dos Santos of vote rigging, sparking fresh armed conflict.

Angola is Africa’s second-largest oil exporter and economic growth is in double digits, but many people remain in poverty.

Two-thirds of Angolans live on less than $2-a-day and at least 40 per cent of the workforce is unemployed. 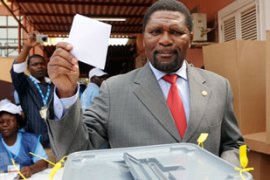 Voting extends into second day in the country’s first elections in 16 years. 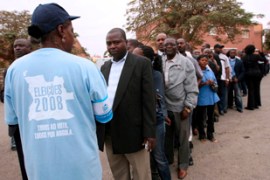 Ruling MPLA party expects to keep a hold on power in country’s first vote since 1992. 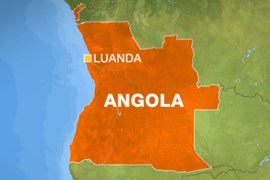