Only a few days ago, McCain was super rich and out of touch.

Thanks to Sarah Palin, there is now a competing image of a war hero: willing to risk both his life and career to defend the country against external threats, and its citizens against predatory government.

The very public reunion on the tarmac between McCain and Palin’s pregnant teenage daughter, and her “fiance”, was an unequivocal sign of the campaign’s commitment to the vice-presidential pick, despite the recent scandals.

The governor of Alaska is able to speak with authority, and as a member of that abstract, yet hotly contested political prize, “Middle America”.

Apart from the superficial gambit to attract disaffected Hillary Clinton voters, and to claim an equal share of historical poignancy, Palin provides vital cover for the candidate’s Achilles’ heel.

On Wednesday, the Republicans launched what has become their traditional battle cry of class warfare.

It pits the “us” of ordinary Americans against the wine and cheese party Washington elite “them”.

This “divide and conquer” strategy has worked successfully in the past, but there is now the nagging detail that the Republican party has been in Washington, occupying the White House, for the past eight years.

George Bush, whose election team under Karl Rove perfected this strategy, was a skilled campaigner.

He was able to adopt a folksy pose that eclipsed the Yale pedigree and the aura of entitlement, but his administration’s legacy – from Katrina to the sub-prime crisis – has made him anathema.

The president was conspicuous by his absence from both the convention hall and the speeches.

No such simple solution exists for McCain.

He does not clear brush, and if he owns a ranch, appears not to remember where it is.

For awhile, therefore, it was unclear on which side of the divide he would fall, with the Democrats clearly suspecting that at least one of his several houses was made of glass.

Yet Palin, the working mother of five, more than compensated for any lack of credibility, as she has authenticity to spare.

Capitalising on a widely reported Barack Obama gaffe, she claimed the authority to speak on behalf of the “they”, in the now infamous “they cling to their guns and Bibles”.

In a clever rhetorical twist, she then warned the Democratic nominee not to speak about “us” in one way in Scranton, and a different way in San Francisco.

The battle lines were drawn, according to the old Republican script.

McCain could never have pulled this off.

Only Palin, with her impeccable “Middle America” credentials, could convincingly claim to be the object of the insult, and fire the first salvo in the class war.

Far from unity, it is a bitter message of divisions and resentment.

Within this formulation, any of her shortcomings only add to her allure.

In the fictional Middle America, academic accomplishment and oratorical virtuosity are suspect, as signs of the hated elite.

The Democratic party always speaks in the third person, when it conjures the proverbial single mother or war veteran to address social ills that require systemic changes, while Palin was always emphatically in the first person singular.

She provides a vital alibi for the Republican party, proof that it is not out of touch, and that its platform is coherent with the political aspirations of the great mass of ordinary Americans, because that is where she allegedly speaks from.

Palin’s world requires no government intervention to fix failing schools, or to make healthcare affordable and accessible, but needs only protection from “terrorism”, higher taxes, and assaults on marriage.

We will have to wait until November 4th to see if that is really where Americans live. 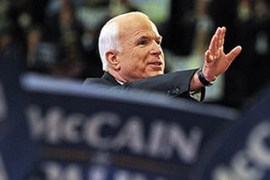 US Republican presidential candidate vows that “change is coming” in US politics. 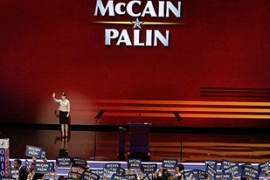 Palin hits out at ‘elite’ critics