Large areas of Gonaives are still deluged by floodwater and up to 70 per cent of its 300,000 residents have been without water or food since the storm hit on Monday, she said.

About 10,000 of the city’s residents have been driven into shelters because of the flooding, Jean-Baptiste said.

Other areas of Haiti affected by the storm remain inaccessible by road, hampering relief efforts.

“Several southern towns have also been flooded and access is impossible because the roads were cut off and the bridges collapsed,” an emergency official said.

Many people are scouring the streets in an effort to find food, Bo reported.

“Most of the roads are completely blocked and the weather has not been helping in order to deliver aid by air so the situation is very complicated on the ground,” she said.

The United Nations is in the process of launching an international appeal after Haiti requested international assistance, a spokesperson for the Office for the
Co-ordination of Humanitarian Affairs (OCHA) said.

The European Commission on Friday has also launched its own aid action for Haiti.

“The European Commission has today launched a fast-track funding decision for two million euros ($2.9m) to provide relief for victims of Tropical Storm Hanna in Haiti,” the EU’s executive arm said in a statement.

Daniel Rouzier, the Haiti chairman of Food for the Poor, said that the situation in the country is “catastrophic”.

“We, just like the rest of the victims … have limited mobility. You can’t float a boat, drive a truck or fly anything to the victims,” he said.

Swathes of northern Haiti are without power due to landslides and flooding after Hanna rained heavily over the mountainous region for four days.

Government and UN convoys attempting to deliver food to the affected areas have been “attacked by famished people,” the official said.

“All roads able to access Gonaives are cut either by bridges that have collapsed, by trees that have fallen down, or by waters that have washed away parts of the streets,” Myrta Kaulard ,a UN food agency representative, said.

Helicopters from the UN peacekeeping mission in Haiti have rescued survivors of the storm from rooftops in Gonaives.

UN officials say they are also seeking ways for the helicopters to deliver food, water and water purification tablets.

“I don’t know how much longer we will remain alive,” Germain Michelet, a priest who took refuge from the flooding on the second floor of the archbishop’s office, said.

“If we are forced to go through another night under these conditions, there will not be many survivors.”

A category four storm, Ike, is also set to shave northern Hispaniola – the island shared by Haiti and the Dominican Republic – on Saturday.

“Two more storms are expected and what we do know is that most of the residents, especially of Gonaives, are leaving,” Bo said.

“It is not clear yet whether they are being evacuated but humanitarian organisations are trying to get people out of there.

But Ronald Semelfort, an official with Haiti’s weather service, said: “We have not yet informed the population about Ike. We do not want to cause panic.” 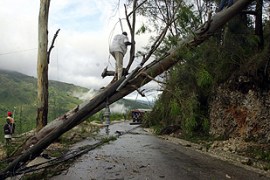