Cheney’s visit to Ukraine and two other former Soviet republics signals that the US will continue cultivating close ties in the region, even after Russia showed it was willing to use military force against countries along its border.

Megan Mitchell, a US administration spokeswoman, said in Kiev: “He acknowledged it’s a challenging time for Ukraine because of recent developments in Russia.”

Ukraine is facing a political crisis, with deep infighting between the Western-oriented president and prime minister sharpened by divisions over ties with Russia.

Their conflict highlights significant differences between the mainly Russian-speaking southeast of Ukraine and the predominantly Ukrainian-speaking northwest of the country, more orientated towards integration with the West.

Cheney’s visit to Ukraine came as the flagship of the US Navy’s Sixth Fleet arrived with aid in the Georgian port of Poti, close to where Russian forces have been deployed since last month’s war with Georgia.

European officials have suggested Ukraine could be the next flashpoint for tensions between Russia and the West after the war in Georgia last month that has left Russian troops occupying positions inside Georgian territory.

Like Georgia, Ukraine has angered Moscow by bidding to join Nato and the EU.

Yushchenko has said his country was a hostage in Russia’s reassertion of influence in the former Soviet Union and has offered to boost defence ties with the West. He has also said that Russia threatens stability in the region.

Cheney, who has said his visit is intended to show US support for its allies in the former Soviet area, was likely to push the pro-Western leaders to save their crumbling government coalition, analysts said.

In Georgia on Thursday, Cheney accused Russia of an “illegitimate” invasion to redraw the map of Georgia and unveiled a $1bn aid package to help reconstruction.

The Russia-Georgia crisis has also begun to make an impact on the US presidential race as John McCain, a Republican candidate, tried to strengthen his image as the stronger candidate on foreign policy and security.

“Russia’s leaders, rich with oil wealth and corrupt with power, have rejected democratic ideals and the obligations of a responsible power,” he said as he accepted the Republican nomination in Saint Paul, Minnesota.

“They invaded a small, democratic neighbour to gain more control over the world’s oil supply, intimidate other neighbours, and further their ambitions of reassembling the Russian empire,” he said in the speech on Thursday.

Tymoshenko and Yushchenko have both been seen as Western-leaning politicians despite differing on domestic issues.

Yushchenko accused his opponents in parliament on Wednesday of a coup attempt and threatened early parliamentary elections after the prime minister’s party sided with pro-Russian deputies to pass laws cutting his powers.

Tymoshenko, once a close ally of the president, in turn accused him of having “destroyed” the governing coalition by pulling out of an alliance with her party after the approval of the legislation.

Tymoshenko has denied reports she has tilted towards Moscow and is about to form a coalition with the pro-Russian opposition. She has not openly criticised Russia over the Georgia crisis.

Before departing later on Friday for Italy, Cheney was to visit the Holodomor memorial in Kiev which commemorates Ukraine’s famine in the 1930s. 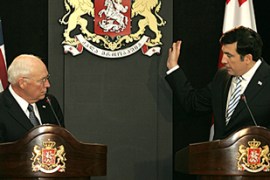