On Wednesday Arroyo reiterated the government’s refusal to sign over more land and rights to Muslims in the resource-rich south.

“In light of recent violent incidents committed by lawless violent groups, the government will not sign the MOA-AD (memorandum of agreement on ancestral domain),” she said in a statement.

“Our commitment is to peace, the constitutional process and rule of law. There will be no peace gained through violence, no peace agreement will be reached through intimidation or the barrel of the gun.”

An official announcement of her decision is expected later today.

Jesus Dureza, an Arroyo spokesman and former peace adviser, said there will be “no more talks”.

“We’re dissolving the peace panel. You don’t need it when you’re ending talks with an armed group,” he told Reuters.

“We’ll start consulting with the people on the ground and find out how can
we resolve the Muslim problem.”

But the deal on the size of a Muslim homeland and a future government’s powers failed following protests by local Roman Catholic politicians and community leaders.

From 2001, Malaysia has been brokering the peace talks and last month agreed to keep its 12 unarmed troops on Mindanao for another three months to help monitor a truce agreement since July 2003.

The conflict has killed about 120,000 people, displaced two million and stunted growth in an impoverished region believed to be sitting on huge deposits of metals and hydrocarbons. 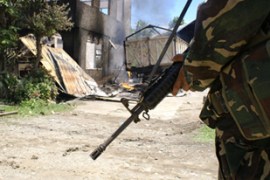