Most of them are out of essential drugs and equipment and relief has yet to arrive, he said.

Mukesh Puri, a Unicef emergency specialist, warned of the risk of disease and predicted it would take time for the flood waters to drain away.

“There is overcrowding in the shelters, so we need to go in and to vaccinate quickly,” Puri said.

“The water may not recede for three months.”

Villagers stormed boats and looted abandoned homes on Sunday as the authorities struggled to rescue hundreds of thousands of people still trapped by the floods.

Survivors of the devastating floods said on Sunday that the rescue operation was failing, accusing the government of abandoning those still stranded in remote villages.

“I left my village 12 days ago when the waters first started to rise. I went out to find food for the cattle and ended up at this camp,” Shivnath Yadav, a 70-year-old sheltering at a makeshift relief camp in the state of Bihar, said.

“I haven’t seen my family since. I want to get them out but no boats are going there. I don’t know what they are eating, or what they are drinking.

“We need the rescue operation to find our families now. But there are not enough boats.”

Indian officials were commandeering private boats to stop the vessels’ owners from making victims pay for rides to safety.

“The problem is that the area is huge and more than 1,000 villages are in the water,” Mishra said.

The monsoon-swollen Kosi river breached its banks two weeks ago on India’s border with Nepal and changed course, swamping hundreds of villages in Bihar.

More than 500,000 people have been evacuated in an operation involving local authorities, emergency workers and the army, Pratyaya Amrit, a disaster management official, said.

Another 800,000 people have made their own way out and sought shelter in overcrowded relief centres set up by the government or in concrete buildings and temples, officials in Bihar said, but at least half a million remain stranded.

At least 500,000 are without access to food and safe drinking water, Amrit said. 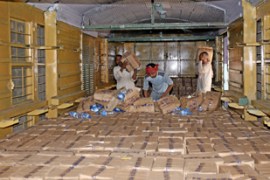 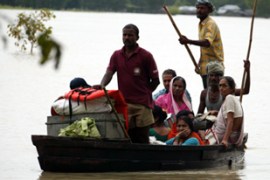