He made fighting crime one of his stated priorities, working to combat drug trafficking and related attacks. He deployed more than 25,000 soldiers across the country, but violence has only escalated.

About 2,700 people have died so far this year in gang-related violence – more than in all of 2007 – according to national media.

One protester, whose baby grandson was kidnapped for ransom, said: “We’re desperate. We ask authorities with all our heart to be more sensitive. Maybe nothing like this has happened to them, or they would be more sensitive.”

More kidnappings are now carried out in Mexico than in Colombia or Iraq.

The largest protest, according to police figures, was in Mexico City where 200,000 people carried symbolic candles while others held photographs of their kidnapped relatives.

The protesters’ next step is to meet Calderon and hand him a document with a string of requests, including proposals collected during the demonstrations.

Organisers wanted to emulate a march from 2004, when almost half a million people showed their opposition to kidnappings and insecurity and forced the government to purge elements of the corrupt police force. 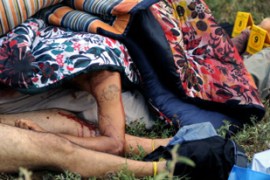