The Indian state government agreed on Sunday to allow the Hindu organisation to use 40 hectares of land, but the move is the second time the government has reversed its position on the issue.

Leela Karan Sharma, who heads the Hindu group, said: “We are suspending the agitation for now.

“The shrine board will now exclusively use the land during the pilgrimage period.”

The government’s announcement was met by dancing and singing from Hindu protesters on the streets of Jammu.

But Muslim groups reacted angrily and Masarat Alam, a spokesman for separatist groups in the region, said: “We reject the deal between Hindu hardliners and the puppet government of Kashmir.

“We appeal to people to continue peaceful protests.”

In the Pakistani city of Rawalpindi, several thousand people staged rallies to show solidarity with Kashmiri Muslims and protesting at Indian security forces alleged excessive use of force to quell protests.

Hindus in Jammu, who form the majority in the city, were angered in July when the government reversed its former position and forbade the Shri Amarnathji Shrine Board from using the land.

At least 38 people were killed and more than 1,000 wounded in the ensuing violence and Hindu protesters blocked main roads into the Kashmir valley, imposing an economic blockade on Muslim residents.

Indian police, who have struggled to restore order after the demonstrations, have shot dead several protest leaders over the past three weeks. 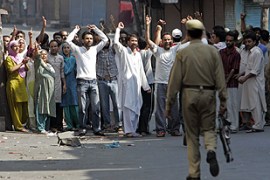 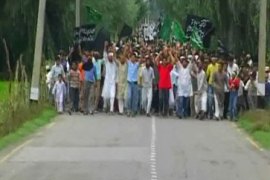 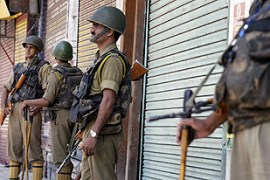