The protests led by the People’s Alliance for Democracy (PAD), which is seeking to force the resignation of the present government, entered its third day on Thursday.

The alliance accuses Samak’s government of corruption and of serving as a proxy for Thaksin Shinawatra, the former PM who was ousted in a 2006 coup and now facing several corruption charges.

Chamlong Srimuang, one of the protest leaders, said they were doing nothing wrong by choosing to remain there.

“We are staging a protest because the government has made too many mistakes and has no legitimacy to run the country,” he said.

Dozens of demonstrators armed with gold clubs, batons and bamboo sticks formed a human shield and locked the gates of the Government House in Bangkok to keep riot police at bay.

Conditions at the site were also deteriorating with bags of rubbish piling up, protesters hanging laundry from buildings and men relieving themselves in public.

PAD leaders said the group planned to appeal the court order to vacate the government compound but argued that they have a legal right to remain.

Chamlong said he and other leaders were ready to be arrested but encouraged supporters to stay on the grounds.

“If we get arrested, please don’t follow us to the detention center,” he said.

“You must remain here and continue fighting. If you leave the government house, that means we have been defeated.”

Samak and police officials have repeatedly said that force will not be used to remove the thousands of protesters who have been camping out in the grounds of the government building since Tuesday.

Police Lieutenant General Suraphol Thuanthong said they will use a “softened stance” to deal with the protesters.

“We will give them time to leave the government house. But if they continue to defy the court order, then we have to use force to drive them out. I cannot set the precise time or deadline for this,” he said.

Government officials, in trying to encourage demonstrators to leave voluntarily, even offered free bus trips back to their provinces. 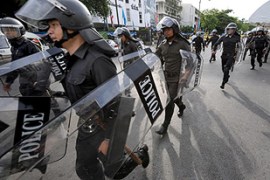 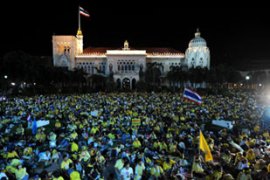 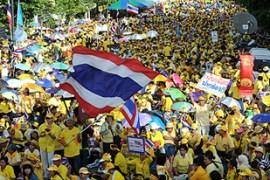