His family fled their home town of Barweh in Galilee in 1948 during the Nakbah, or ‘Catastrophe’ – the name given by Palestinians to the creation of Israel when many were forced to flee what had formerly been Palestine.

A year later, he returned illegally with his family to his town, to become an exile in his own country.

He joined the Israeli communist party and started publishing poems in leftist newspapers. His poems brought him persecution from the Israeli authorities, and love from the Arab public who saw in him their collective conscience.

He left in 1971 to study for a year in what was then the Soviet Union, before travelling to Egypt where he worked for Al-Ahram newspaper.

He also worked in Beirut, the capital of Lebanon, as an editor for the journal Palestinian Issues, but was forced to leave after the 1982 Israeli invasion.

He spent his life in exile between Arab capitals, including Amman, and also Paris, the French capital.

Darwish, who was a member of the executive committee of the Palestinian Liberation Organisation (PLO), resigned in 1993 in protest at the signing in Washington of the Oslo Accords.

The accords, agreed in Norway, were the first direct agreement between Israel and political representatives of Palestinians in which some Palestinian groups accepted the right of Israel to exist as a state in what had previously been Palestine.

Some observers saw his resignation as an act of divorce from politics, and believed he had forever abandoned the resistance by Palestinians to Israeli occupation.

Some saw this belief as being confirmed by the fact Palestine no longer remained the focus of his poetry.

But Darwish’s decision to be seen to leave politics and ideology in reality signalled his refusal to be used by politicians, or to abuse the Palestinian cause.

He wanted to be celebrated for his poetic talent but, as a Palestinian, he rejected the notion of building his fame on the bodies of dead Palestinians.

By doing so, he blended the Palestinian story with mythology, history and the trials and tribulations of the oppressed, making the Palestinian cause more vivid for a world audience – but also more personal.

Darwish sought to transcend the political experience into the wide realm of the human being.

This gave him a chance to innovate with poetic structure and the classical Arabic language and enabled him to preserve the flow and grace of his poetry, despite its complexity.

Darwish returned to Ramallah in 1996 and re-established the prestigious journal Al Karmel, which had been originally founded in 1981 but interrupted the following year by the Israeli invasion of Beirut, and remained its editor-in-chief until his death.

During his stay in Ramallah, the literary movement was thriving. He helped introduce other exiled authors to the public, including Ghassan Kanafani.

Darwish once said: “I thought poetry could change everything, could change history and could humanise …  but now I think that poetry changes only the poet.”

The reaction to his life, death and poetry testify to his error. 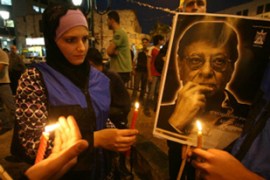 President leads mourners for Mahmoud Darwish, who died at age 67 on Saturday.