But the PPP under Asif Ali Zardari – who confirmed on Saturday that he would bid to replace Musharraf – has been stalling on the issue.

Sharif has been asked to support Zardari’s nomination but has made this conditional on the return of the judges and the PPP leader agreeing to limit the powers of the presidency.

He says that Zardari has reneged on a written agreement to restore the judges within 24 hours of Musharraf’s decision on August 18 to quit rather than face impeachment charges.

Siddiqul Farooq, a spokesman for the PML-N said that the issue of  whether Zardari would stand for the presidency was the PPP’s “own decision,” not that of the coalition partners, but reiterated his leader’s demands.

“We do not want a civilian president with the same powers that Musharraf had, mainly the power to dissolve parliament,” Farooq said.

“Our top priority is restoration of the judges and we want it done on Monday.”

Analysts say the PPP is reluctant to restore the judges because of concerns the deposed chief justice might take up challenges to an amnesty from corruption charges last year granted to Zardari and other party leaders.

In a sign that relations between the two sides were becoming increasing fractured, another of Shraif’s aides on Saturday offered to stand for the presidency in opposition of Zardari.

“I am also willing to contest the presidential election, but I am bound to obey what the party decides,” Javed Hashmi, one of Sharif’s most senior aides, said.

Kanwar Dilshad, the election commission secretary, said nomination papers for the presidency can be filed from August 26, with the final date for any withdrawals on August 30.

Under Pakistan’s constitution, a president is elected by members of the country’s four provincial assemblies and the national parliament within 30 days of the post becoming vacant.

The political deadlock is making it increasing difficult for the government to tackle economic problems in the country, unrest in the tribal areas and the growing strength of armed pro-Taliban groups.

The security situation in Pakistan has prompted the International Cricket Council (ICC) to postpone the champions trophy tournament due to take place next month, until an undisclosed time in 2009.

The move comes after South Africa pulled out of the tournament on Friday. Several other countries were alos said to be considering withdrawing. 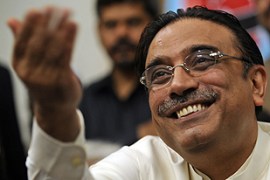 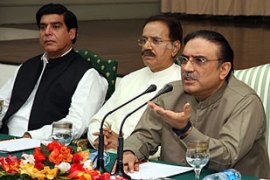 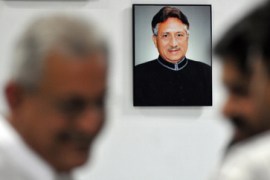 Musharraf has resigned but the political fallout will test the ruling alliance.