“The curfew has been imposed to pre-empt the rally,” a police officer said.

On Saturday, a general strike to protest Indian rule brought the region to a halt. The strike was to continue on Sunday.

A government official said the curfew was a “precautionary measure” because of information that separatist leaders could be the targets of violence.

“They are scared of our peaceful but massive demonstrations for freedom,” Mirwaiz Umar Farooq, the region’s clerical leader, said.

“Such repressive measures will not work. We will emerge stronger and more vibrant,” he said, adding that Monday’s rally would still go ahead despite the curfew.

The protests were sparked after a dispute with the region’s Hindus over transfer of land to a shrine trust, bolstering separatist sentiments in Kashmir. 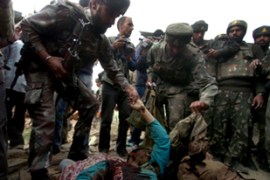