The security pact calls on citizens to monitor official security efforts, strategies against money-laundering and drug-trafficking, and a strong participation of rights groups.

The agreement also sets up a national database of mobile telephone numbers, rewards for people who inform on criminals and the creation of two federal prisons for kidnappers.

More than 2,500 people have been killed in drug related violence this year, while abductions have jumped almost 40 per cent nationwide between 2004 and 2007 taking Mexico past Colombia and Iraq as the world’s kidnapping centre, according to a recent study.

Deadly attacks linked to drug gang violence have escalated across the country since Calderon, who took office at the end of 2006, launched a military crackdown.

But it was the recent kidnap and murder of a teenager from one of the country’s wealthiest families, in which police were allegedly involved, that unleashed a wave of public anger, with mass protests planned for later this month.

Alejandro Marti, father of the murdered boy, called on politicians to act or step down.

“If you think this task is impossible, resign,” he told the meeting.

“We have to recover confidence in our institutions, in our state, in our country.”

Marcelo Ebrard, a mayor in Mexico City, accepted the challenge.

“We must improve security in our city and if we don’t there are established procedures in the capital for revoking a mandate, which is what should happen,” Ebrard, who is mayor of about half of the greater Mexico City area, said.

In the first half of this year, official figures showed 323 reported kidnappings in Mexico City, compared with 438 for the whole of last year.

“We have all sorts of industries arising around this, we have ransom negotiators popping up, there are insurance companies that offer services to insure your family and friends,” he said.

There is even now the possiblity of getting a chip fitted so you can be tracked down by satellite and GPS.”

Meanwhile, reports said six police officers were killed and two others wounded in three different Mexican states, while four civilians were killed in the northern border town of Ciudad Juarez in the past 24 hours.

The deployment of more than 36,000 soldiers across the country since early 2007 in an effort to combat drug trafficking and related violence has had little impact. 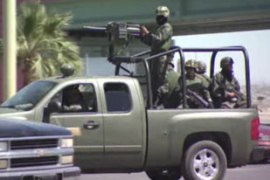 Move is latest in series of government measures to tackle drug-linked violent crime. 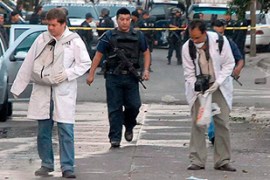 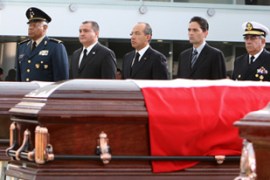 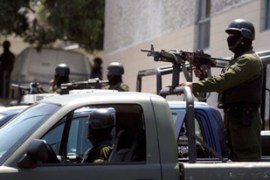 President says Mexicans will not ‘live in submission’ amid wave of gang violence.