Mwanawasa’s health deteriorated after he suffered a stroke while attending an African Union summit in Egypt in June.

He was rushed to a hospital in Paris, the French capital and a statement on Monday night indicated that the president’s health had taken a turn for the worse.

“We need to be united during this period of mourning. Indeed, our country has been plunged in a situation of uncertainty but we need a unity of purpose,” he said.

Mwanawasa was elected president in 2002 – Zambia’s third president since independence from Britain in 1964 – in an election disputed by his opponents.

But he won praise for his anti-corruption and economic modernisation drive in one of the world’s biggest copper producers, but was unable to lift his nation out of poverty.

In recent months, he broke African leader’s traditional silence towards the actions of Robert Mugabe, the Zimbabwean president, describing Zimbabwe as a “catastrophe” and criticising the the 2008 presidential elections.

Under Zambia’s constitution, elections are meant to be held within 90 days of his death.

Vice-president Banda is expected to take over as acting president until then. 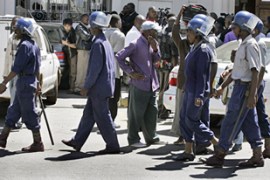 India makes ‘impressive gains’ in fight against malaria: WHO