The white car destroyed in the blast had a number plate from the southeastern city of Sanliurfa and was heading towards Mersin city, Aksoy said.

The governor said one of the police officers was badly hurt.

The identity of the assailant was not known.

Al-Qaeda, Kurdish and leftist fighters have all carried out bomb attacks in Turkey in the past.

Some 40,000 people have been killed in the conflict between the separatist
PKK and the Turkish state since it broke out in 1984.

They were the most lethal such attacks in Turkey since 2003 when al-Qaeda fighters carried out a series of bombings in Istanbul, killing more than 60 people.

Also in July, three Turkish policemen and three gunmen were killed in an attack on the United States consulate in Istanbul. 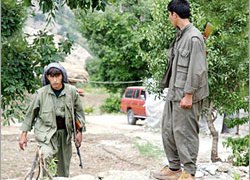 A bomb has killed at least three people and injured 14 others in the Kurdish-dominated southeast of Turkey, the Anatolia news agency has reported.

Two policemen have been killed overnight in predominantly Kurdish southeastern Turkey, the latest example of mounting unrest in the region.