But overall the Afghan reaction to Musharraf’s resignation has been “diplomatic”, Zeina Khodr, Al Jazeera’s correspondent in Kabul, said.

“A foreign ministry adviser told Al Jazeera that they hope this change will be good for Afghanistan, but this adviser stressed that the role of Pakistan’s intelligence agency and the military establishment has to be reduced for relations to improve between both countries,” she said.

“We’ll have to wait to see whether more co-operation will develop between both countries now that Musharraf has gone.”

Afghan officials have repeatedly accused Islamabad of not doing enough to clamp down on sanctuaries for anti-Afghan government fighters across the border in Pakistan’s tribal regions.

“We hope that the resignation of President Musharraf … leads to a strengthening of the civilian government and democracy in Pakistan,” Sultan Ahmad Baheen, an Afghan foreign ministry spokesman, was quoted by the AFP news agency as saying.

“Afghanistan is in favour of a democratic and stable Pakistan which is based on the rule of law.”

The United States, with which Pakistan has been closely allied, since the September 11, 2001 attacks on the World Trade Centre in New York, said it would continue to support the Pakistani government.

“We will continue to work with the Pakistani government and political leaders,” Condoleezza Rice, the US secretary of state, said in a statement.

She said the US would encourage the Pakistani government “to redouble their focus on Pakistan’s future and its most urgent needs, including stemming the growth of extremism”.

“The United States will help with these efforts to see Pakistan reach its goal of becoming a stable, prosperous, democratic, modern, Muslim nation,” she said.

But Ameen Jan, a London-based Pakistan analyst, told Al Jazeera, that the US would need to take a close look at who it worked with in Pakistan’s civilian government.

“US policy is going to have to shift very quickly in terms of figuring out who they can work with. while Musharraf was there they had one point of contact – General Musharraf – in the alliance against terrorism and the fight against extremism,” he said.

“Now with Musharraf gone, the question of who is a reliable partner becomes very important for the US. Recently the moves made by the government to undertake dialogue with the extremist elements in the tribal areas was not looked on favourably by the US.”

While many Pakistanis criticised Musharraf as a dictator, India enjoyed some of its best diplomatic relations in decades during his rule.

“India will continue to have an amicable relation with Pakistan in the days to come,” Pranab Mukherjee, India’s foreign minister, said.

Under Musharraf, peace negotiations between the two countries – begun in 2004 – seemed to be progressing. A cross-border bus service was set up and there were increasing trade and some progress over border disputes.

But as Musharraf’s influence waned, a spike in violence across the Indian border followed and New Delhi fears that a weak civilian government in Islamabad will be unable to exert the same influence that Musharraf did over Pakistan’s army and the ISI.

“How the vacuum is handled by the civilian government, how much control they can exercise on the radical elements remains to be seen,” an unnamed senior Indian foreign ministry official, was quoted by the Reuters news agency as saying.

“Whether he is impeached or not is not important from the Indian point of view,” Narayanan was reported in Singapore’s Straits Times newspaper as saying.

“But it leaves a big vacuum and we are deeply concerned about this vacuum because it leaves the radical extremist outfits with freedom to do what they like, not merely on Pak[istan]-Afghan border but clearly our side of the border too.”

Bangladesh, a longstanding ally of Pakistan, from which it won independence after a bloody nine-month war in 1971, said it hoped the citizens of Pakistan would determine their country’s future.

“The people of Pakistan should be in charge of their own political destiny and as the process evolves, we wish them well,” Iftekhar Ahmed Chowdhury, Bangladesh’s foreign minister, said in a statement.

Bangladesh is being ruled by a military-backed caretaker government after the country’s president canceled general elections and declared a state of emergency in January 2007.

“The announcement … by President Musharraf that he is standing down as president brings to a close a critical period in Pakistan’s  history and its relations with the UK and other countries,” David Miliband, the UK’s foreign secretary, said in a statement.

To let Al Jazeera know your thoughts on the resignation of Pakistan’s president, visit the Your Views page of the website. 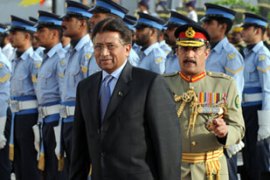 Move follows months of pressure from the country’s civilian government.