About 800 troops from Cambodia and 400 from Thailand have been facing off in the area for a month.

On Thursday, Genernal Neang Phat, the Cambodian deputy defense minister, said the two countries agreed to a gradual redeployment of troops from the area ahead of talks between their foreign ministers on territorial disputes next Monday in Thailand.

The protests left Samak politically vulnerable, and he sent troops to occupy another disputed temple compound adjacent to Preah Vihear to appease his nationalist critics.

Cambodia responded with its own troop deployment.

The border dispute has not been resolved despite two rounds of talks since last month, with the countries referring to two different maps.

Thailand relies on a map drawn up later with American technical assistance. 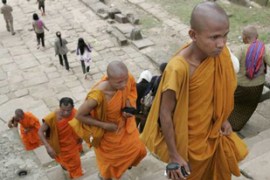 Cambodia and Thailand to reduce troop presence and continue talks over Preah Vihear.