Alastair Macdonald, Reuters bureau chief for Israel and the Palestinian territories, said on Wednesday that the agency was “extremely disappointed” by the report.

He said Reuters would seek urgent talks with Israeli officials to find out how safety for journalists could be improved. It would also be looking at legal options, he said.

“We believe that there were grounds for them to realise that they were looking at a journalist,” he said.

“This puts us in a position where journalists cannot raise a camera in the presence of Israeli soldiers without the risk of being fired on.”

Shana, 24, was filming two Israeli tanks positioned about one-and-a-half kilometres away from where he was standing when he was fired on.

He captured on film one of the tanks firing the shell that killed him.

The footage showed one of the tanks firing the shell that killed him before being abruptly cut off as it burst over his head.

Mendelblit said in his report that the tank crew could not tell whether the object mounted on Shana’s tripod was an anti-tank missile, mortar or a television camera.

He also said an attack earlier that day that killed three Israeli soldiers in another part of Gaza, a separate grenade attack on an Israeli tank, and the fact that Shana and his soundman, who was wounded, were wearing body armour “common to Palestinian terrorists” increased suspicion.

He said: “There is no doubt that Fadel Shana’s death is a tragedy. However … the available evidence does not suggest misconduct or criminal misbehaviour.

“I have therefore decided … that no further legal measures will be taken.”

Both journalists and their vehicle were displaying clear “press” markings and journalists in Gaza have said they have rarely seen Palestinian fighters wear flak jackets.

The army said the soldiers had not seen the “press” signs.

Reuters also said it had written to Mendelblit on Wednesday asking why the soldiers ruled out the possibility that Shana was a cameraman.

The agency said it had also asked why the fact he stood in full view of the tanks for some minutes did not suggest he had no hostile intent and why the tank crew, if concerned but unsure, did not simply reverse out of sight. 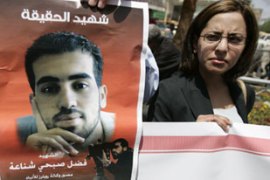