Tchute was arrested by Guinea-Bissau authorities on Friday after he allegedly tried to overthrow the government, but he escaped and fled to nearby Gambia.

The naval chief arrived in Gambia by sea on Monday, according to Gambian authorities, and was arrested a day later.

Tchute denies any involvement in the alleged coup attempt.

Guinea-Bissau is caught up in a political crisis which has seen its parliament and government dissolved in the past week, with the attempted coup adding to instability ahead of parliamentary elections due in November.

The country has endured a series of political crises, punctuated by coups and war, since independence in 1974.

Analysts fear recent political uncertainty, coupled with a tide of drugs smuggled through the country, is undermining efforts to restore stability after decades of chaos.

“Everything points to the fact that the failed coup was linked to drugs trafficking,” Joao Bernardo Vieira, a spokesman for Guinea-Bissau’s president, told Radio France International earlier this week.

UN drugs experts say the country has become a hub for international cocaine smugglers taking advantage of poor security and, analysts say, the complicity of local officials to smuggle drugs to Europe. 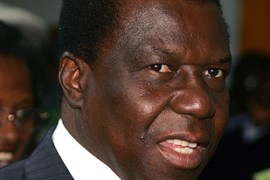 Navy chief dismissed after accusations he plotted to overthrow the president.